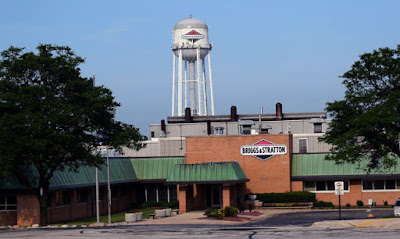 Small engine manufacturer Briggs & Stratton Corp., founded in Milwaukee in 1908, on Monday filed for bankruptcy protection with plans to sell its assets to a private equity firm that specializes in manufacturing and has done previous deals in Wisconsin.
Briggs filed for Chapter 11 in the U.S. Bankruptcy Court for the Eastern District of Missouri. Under Chapter 11, a company and its creditors work out a reorganization plan that enables the business to continue to operate.
Briggs, one of the world's largest manufacturers of small gasoline engines, employs about 5,000 people worldwide including around 1,300 in the Milwaukee area. Years ago, the company had 11,000 employees just in Wisconsin.
As part of the bankruptcy, KPS Capital Partners LP, a New York private equity firm, has entered into an asset purchase agreement with Briggs to buy all of the company’s assets for approximately $550 million.
The so-called stalking horse bid sets a minimum price for the sale.
The offer would need court approval and could still be topped by another bidder, but for now it's probably "the best outcome they could come up with," analyst Tom Hayes with Northcoast Research said about Briggs situation.
The manufacturer of small engines used in outdoor power equipment around the world said it arranged for $677.5 million of debtor-in-possession financing that would help fund operations during the bankruptcy proceedings. KPS said it agreed to provide $265 million of that amount as part of the reorganization.
Read more: https://www.jsonline.com/story/money/business/2020/07/20/briggs-stratton-company-founded-1908-files-bankruptcy-protection/5470618002/
Posted by OrbsCorbs at 3:51 PM