RACINE — Racine County Circuit Court Judge Michael Piontek has decided to uphold the findings of the Racine Unified School District referendum recount, though opponents who appealed the recount have already stated they plan to file another appeal to a higher court.
On Friday, Piontek issued a decision in support of the RUSD Board of Canvassers’ final tally of 16,715 votes in favor of the April referendum and 16,710 votes in opposition.
“The Court finds that a full, fair transparent and accurate recount occurred,” Piontek’s decision stated.
“We are pleased that Judge Piontek upheld the recount and we now look forward to moving ahead,” said RUSD spokesperson Stacy Tapp by email. “This referendum will transform our district and support excellent learning opportunities for Racine students for years and years to come. Now more than ever, we recognize the need for modern learning spaces and technology for all students.
One of the plaintiffs in the case, Dennis Montey, said he plans to appeal Piontek’s decision.
“Not only should Piontek have recused himself in this matter, due to his previously serving on the School Board as well as an official position at Horlick High School, but he also refused to consider solid evidence, as corroborated by videos supplied by RUSD,” Montey stated in an email. “He has failed to serve justice in the case and showed obvious bias from the beginning. You can expect an appeal to be made in hopes this appeal will fall into the hands of a more thorough and fair judge.”
Piontek in the past volunteered with Horlick High School parent organizations.
Piontek also dismissed the petitions by James McClain to either intervene in the case or for Piontek to recuse himself, stating they were found to be “without merit.”
Read more: https://journaltimes.com/news/local/judge-piontek-upholds-rusd-referendum-recount/article_ab6110a8-4e52-52df-a4c3-8cf10d29b9be.html

Judge Piontek is upholding the great Racine tradition of tainted jurisprudence.  Party on, lying pigs!
Posted by OrbsCorbs at 6:35 AM 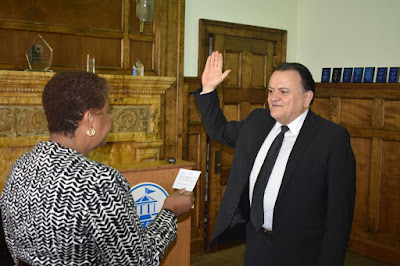