Millions of Wisconsin residents use the postal service for packages and to vote. New changes could slow down delivery. 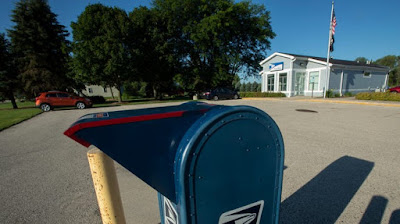 MALONE - Sara Sippel pulled up to the tiny post office surrounded by verdant fields of soybeans and dropped off an envelope.
She was having trouble filing her taxes online and when she realized she couldn't, Sippel knew there was an alternative: mailing it.
"To be honest I don't use the post office all that much, but I need it today," Sippel said Tuesday in the Fond du Lac County community of Malone. "Had it not been for this post office, I'd have had to drive all the way to Fond du Lac."
She visited her local post office a day after a memo circulated among postal employees throughout the United States outlining changes that could slow down mail delivery.
Sippel, like many Americans, didn't know the post office is facing financial difficulties. What Sippel does know, she said, is how important it is to get packages delivered to her home, where sometimes the letter carrier brings them to the door because he knows she has small children.
Letter carriers also sometimes make multiple daily trips to distribution centers, where mail is sorted, to pick up additional mail and ensure it's delivered quickly. But as first reported Tuesday in The Washington Post, employees were told Monday that they should leave mail behind in the distribution centers if it will delay carrier routes.
This is as the post office has been a vital lifeline during the pandemic, delivering medicine, toilet paper, food and other items.
The agency has also become an even more important part of elections, with many Americans choosing to vote by mail rather than risking infection by standing in line at polling places. More than 1.1 million Wisconsinites voted by absentee ballots during the April primary.
With coronavirus cases and deaths spiking again, the November presidential election could see unprecedented numbers of mailed-in ballots.
Read more: https://www.jsonline.com/story/news/2020/07/17/usps-risk-even-post-offices-delivery-more-vital-during-covid-19-wisconsin-postal-service/5446431002/
Posted by OrbsCorbs at 11:33 AM