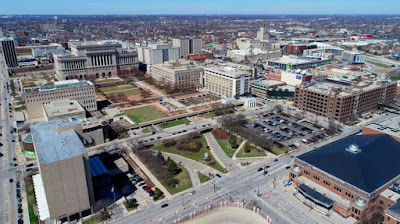 Next month's  Democratic National Convention may be scaled back but the Milwaukee Police Department is scaling up with an equipment order that includes barricades, pepper spray, a "tactical gas delivery system," plus food and drink for thousands of officers who will be deployed.
The shopping list is detailed in nearly two dozen bid opportunities, with 13 for more than  $50,000 each. Urban Milwaukee first reported the bids.
The city will pay for the gear out of a $50 million federal grant to secure the convention, to be held August 17-20.
While Joe Biden is expected in the city to accept his party's presidential nomination, delegates have been told to stay away because of the coronavirus pandemic, and the main venue has been switched from Fiserv Forum to the Wisconsin Center.
Still, it's a big event with a large security footprint west of the Milwaukee River.
Last month, Assistant Police Chief Michael Brunson told a Common Council committee that the police department was prepared to deal with "potential unrest" that might occur at a national convention.
"We all know the climate, of not only Milwaukee right now but the whole country," he said. "Throw in the political animus that's present throughout this country, and even though the footprint will be smaller, that says nothing to the amount of agitators, protesters and white supremacists, you name it, groups that are upset and very animated about the political process.
"Because of that, because of the potential threats in that regard, then as far as the equipment that we would need, just because there are not as many people in the convention, that doesn't prevent the protesters, agitators, etc., from coming and trying to disturb what the convention represents."
Among the orders: a rental of 32,750 barricade fences to be delivered and assembled on August 13. The city is also looking to procure 500 4,000-pound concrete jersey barriers.
Police want to buy 1,000 canisters of pepper spray with an effective "spray range" of 18 to 20 feet, and a "tactical gas delivery system," to be mounted on a BearCat armored vehicle.
They are seeking the DRACO Gas Delivery System or its equivalent. The system has to be "capable of delivering up to eight command initiated chemical canisters and up to two noise flash" diversionary devices.
Police will rent 10 passenger buses and purchase four digital signboards, 50 handheld radios and also upgrade technology at the Emergency Operation Center and three other facilities.
Police are also seeking to buy 61 combat trauma medical bags, 40 tactical ballistic vests and air purifying respirator equipment.
For police, there will be plenty to snack on and lots of ways to hydrate: 12,000 packages of beef jerky, 12,000 packages of trail mix, 134,400 bottles of water and 50,400 bottles of Gatorade or Powerade.
A food service contract is also out to bid to feed police at up to four locations. The city plans to award contracts to five or more service providers.
From: https://www.jsonline.com/story/news/politics/elections/2020/07/14/dnc-milwaukee-police-scaling-up-despite-downsized-convention/5432633002/
Posted by OrbsCorbs at 10:39 AM