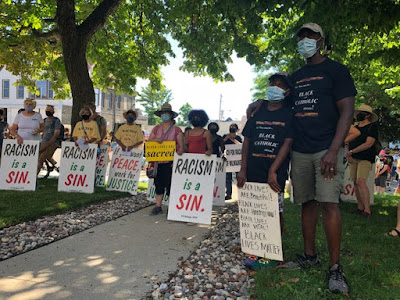 As a father and Black man of faith, Carl Carby felt it was important to bring his 10-year-old, London, to march for racial equity on Saturday.
“This is history,” said Carby, who joined hundreds of others outside his parish, St. Francis of Assisi Catholic Church, in Milwaukee.
“This is an opportunity for my son to participate in a legacy of making change. I’m trying to raise my son with the vision to treat everybody equally and to be treated the same way."
The demonstration, organized by the Archdiocese of Milwaukee's Black Catholic Ministry Commission, kicked off at St. Francis, a diverse parish just north of downtown.
St. Francis' priest, the Rev. Mike Bertram, led marchers down Vel R. Phillips Avenue, many in the racially mixed crowd wearing T-shirts and holding signs declaring "Racism is a sin."
Read more: https://www.jsonline.com/story/news/local/milwaukee/2020/07/11/racism-sin-milwaukees-black-catholics-march-racial-justice/5421917002/

"Racism is a sin."  So is pedophilia, but Catholics don't want to talk about that.
Posted by OrbsCorbs at 9:09 AM

"Racism is a sin." So is pedophilia, but Catholics don't want to talk about that.