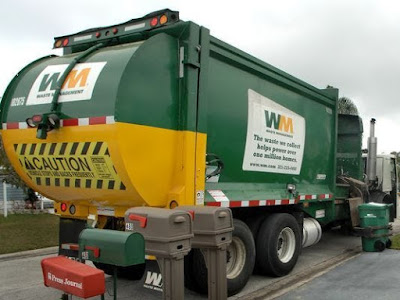 The U.S. Environmental Protection Agency fined Waste Management of Wisconsin, Inc. after decades of hazardous waste violations at the Metro Landfill in Franklin.
The EPA issued a $232,000 fine to WMWI through a settlement resolving violations of the Resource Conservation and Recovery Act, according to a news release from the EPA. WMWI has agreed to conduct leachate and groundwater monitoring, per the settlement, and will update its waste management and training program.
The claims against WMWI are directed toward the Metro Landfill, where WMWI owns and operates a recycling and disposal facility. According to the EPA, “the Metro Landfill is licensed by the state of Wisconsin to accept non-hazardous municipal, commercial, industrial and special wastes for disposal.” However, the facility is not authorized to store, treat or dispose of any hazardous waste.
According to allegations from the EPA, WMWI “improperly disposed of hazardous electric arc furnace dust” from the Maynard Steel Casting Company in Milwaukee. That dust was contaminated with chromium — a known human carcinogen that can cause damage to the nose, throat, eyes, skin, lungs and potential lung cancer.
Lab testing in October 2009, along with further testing showed the dust from Maynard Steel contained barium, cadmium, and chromium, which are all identified as hazardous constituents in the RCRA regulations, according to a complaint filed July 1 with the U.S. Department of Justice.
According to the complaint, since at least 1999, "WM has improperly accepted and disposed of hazardous waste at the Metro Landfill without a permit and without complying with applicable hazardous waste regulations issued by EPA and the state of Wisconsin.”
It further asserts “the dust produced by Maynard Steel’s (electric arc furnaces) exceeded the regulatory level of 5 mg/L for several years prior to the October 2009 testing.” Additionally, WMWI accepted hundreds of tons of this hazardous dust in over 100 shipments.
That dust is still at the landfill, according to the complaint.
EPA Region 5 Administrator Kurt Thiede said this action against WMWI reflects the EPA’s commitment to ensure compliance with laws at the federal and state level.
“(The) EPA takes seriously every company’s obligation to properly manage solid and hazardous waste to protect our communities and their citizens,” Thiede said.
The proposed settlement is subject to a public comment period of 30 days and final court approval, according to the release. The comment period as of July 6 is yet to be scheduled, according to the DOJ website.
Contact Erik S. Hanley at (262) 875-9467 or erik.hanley@jrn.com. Follow him on Twitter at @ES_Hanley.
From: https://www.jsonline.com/story/communities/south/news/franklin/2020/07/07/waste-management-fined-dumping-hazardous-waste-franklin-epa/5388142002/
Posted by OrbsCorbs at 7:58 AM