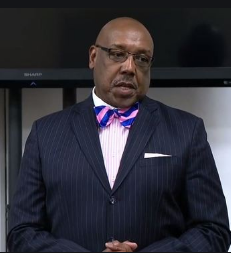 Newly appointed City of Racine Police Department Chief Maurice Robinson has been on the job since his swearing in ceromony on May 10th, 2021, yet few have seen or heard from him since then.

It also appears the the majority of the men and women in blue who serve our community are also asking "where's Waldo Maurice"?

We at RCC are wondering if Chief Robinson figured out he got hoodwinked by  "defund the police" Mayor Mason, his puppet common council and the inept Police and Fire Commission.

All of the officers we have contacted has stated they have not met or talked to newly appointed Chief Maurice Robinson before or after his swearing in on May 10th.

It appears his work calander has been blanked out on Friday afternoons and word on the street is that he has been traveling back to Cincinnati for the weekends.

So what has Chief Robinson been up to since he became chief?

The Police and Fire Commission did have the following on today's schedule but we could not find any video or audio of today's alleged discussions.

We at RCC feel for this newly appointed Police Chief and wish him the best at his new job. Robinson has to answer to a corrupt mayor, a puppet common council and an inept, derelict, anti-police and "no names" Police and Fire Commission.

Check out the City of Racine website to determine who is on the Police and Fire Commission, bet you can't find the list of the 4 fools on the commission with an unappointed vacant seat for over a year.

Posted by OrbsCorbs at 9:54 AM

Why does Racine recruit leadership positions from outside the community?

How they control people who move to the area?

What happens to them once they realize what they are a part of?

Why was Thomas the fake candidate to run for Racine County DA?

Why was he chosen to prosecute Kyle Rittenhouse?

Why was Bob Turner the fake candidate to run for Racine Mayor against John Dickert?

Who did Carl Hubbard work for and what other boards does he serve on?

What really happened to Rae Antczak?

Looks like anonymous #2 knows more than the average bear.

Binger was a real candidate for D.A. but couldn't muster any votes outside of the city of Racine.

The reason Binger is prosecuting Rittenhouse is because Binger is Gravely's go to guy when guns are involved or self defense is used in pleadings.

Binger likes looking like a fool when it comes to any gun offenses or his ho girl friends he can't control.