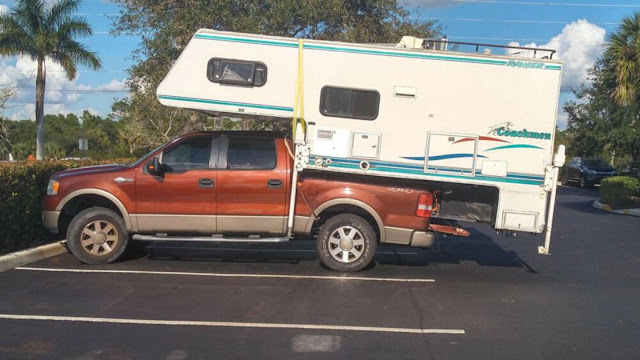 Just because someone can pass their driver's test it doesn't mean they should be trusted on public roads. Such is the case with this Ford F-150 owner who decided to sit an entirely-too-large camper shell on the back of their pickup, bending the bed and nearly snapping the frame in half. As we know, when something like that happens, you wind up here. On the internet.
This poor, victimized truck is an 11th-generation F-150 in King Ranch trim, made between 2004 and 2008. At the time, it was cream of the crop: saddle leather seats, a power sunroof, and even a Sony surround sound system. It came standard with a 5.4-liter V-8 making 300 horsepower and 365-pound-feet, proving it to be an exceptional performer in the towing and hauling departments.
Still, though, this slide-in camper is too much. First, it's clearly intended for a long-bed truck and this—as you can see—is a short-bed model. Secondly, a quick Google search shows that the topper weighs around 2,800 pounds; this particular F-150 only touts a payload capacity of around 2,000 pounds in crew cab, four-wheel-drive configuration.
This is a recipe for disaster as one Reddit user pointed out on the original thread.
“That camper weight is probably dry. Once you add passenger, liquids, and luggage, that truck is toast," said one commenter.
Others think that while the bed is clearly toast, and the frame itself may be OK.
“It’s probably just bed damage and not the frame but still,” mentioned one user.
“You can see the straight frame below it in the shadows. There are a handful of bed bolts between this and catastrophe,” added another.
The teensy strap that's been lobbed from one side of the bed to the other isn't doing much for load security, either.
Hopefully, the driver knew better than to hit the road once they parked and saw the damage to their truck. Then again, who would think they'd ever see something like this in public to start with?
From: https://www.thedrive.com/news/31525/this-crumpled-ford-f-150-pickup-shows-why-you-should-never-overload-your-truck
Posted by OrbsCorbs at 4:16 AM