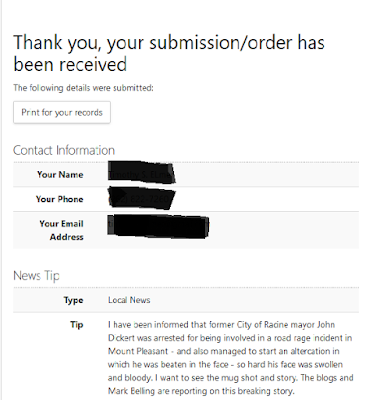 
MOUNT PLEASANT — Charges are pending against former Racine Mayor John Dickert after he was reportedly involved in a fight in a local grocery's store parking lot after an alleged road rage incident. 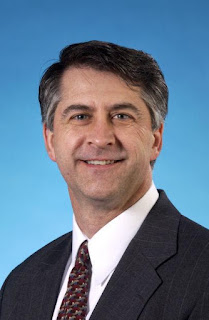 The two suspects involved in the fight were identified as former Racine Mayor John Dickert, 57, and 18-year-old Christian Reynoso, both of Racine, the Mount Pleasant Police Department confirmed.
Dickert was elected as Racine's mayor in 2009 in a special election, and re-elected in 2011 and 2015. He resigned in 2017.
Investigation into the incident revealed that Dickert and Reynoso had reportedly been driving in separate vehicles on Highway 20/Washington Avenue. After a road rage incident between the two, both of the vehicles pulled into the Piggly Wiggly parking lot.
Shortly after, Dickert and Reynoso reportedly got out of their vehicles and started fighting each another.
Both Dickert and Reynoso were injured in the fight. The South Shore Fire Department responded to provide treatment; however, no one was transported to the hospital.
Charges of battery and disorderly conduct have been referred to the Racine County District Attorney's Office for both Dickert and Reynoso.
“There is a referral to the District Attorney for both Dickert and Reynoso. At the time point, the District Attorney has not made a charging decision," said attorney Patrick Cafferty, who is representing Dickert. "On Mr. Dickert’s behalf, I have been in touch with the Racine County District Attorney. We are in the process of exchanging information and we ask that the public withhold judgment until all the facts are available.”
After Dickert resigned in 2017, he became president and CEO of the Great Lakes St. Lawrence Cities Initiative. He currently works as Division Administrator for the Wisconsin Department of Revenue.
From: https://journaltimes.com/news/local/crime-and-courts/former-racine-mayor-john-dickert-reportedly-involved-in-road-rage/article_42e2d70d-8c47-53a2-833f-184de10f32a2.html#tracking-source=home-breaking

ggodmuls Mar 26, 2020 11:07am
Since John Dickert was arrested - would you please post his mug-shot?
In the incident involving former Racine County Republican DA Rich Chiapette and his wife Jennifer - who lied to the Racine Police and attempted a cover-up - you did great reporting, brought forward the truth - and informed the Community about the implied abuses of power occurring in the DA's office.
John Dickert - being older and "wiser" had a choice - and he chose to carry on the altercation. His other choice was to have gone his way - and gone home. Was Tony Ever's Administrator of state and local finance driving a taxpayer funded vehicle - or claiming mileage?
John Dickert's lack of insight and discretion in this matter only PROVES that he is unqualified for any position in Government - but this has not been Dickert's failure for the first time. John Dickert has a record of failure - and a record of being rewarded by questionably competent Superiors for his brown - nosing ways.
JT - Thank you for the great reporting.
Posted by Clint Teeters at 12:22 PM