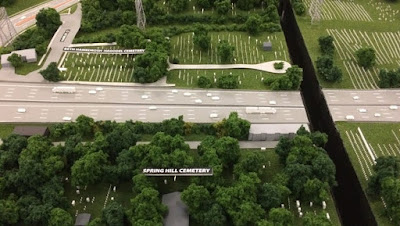 MADISON - Tony Evers is trying to revive a nearly $1 billion on-again, off-again construction project to rebuild I-94 between the Marquette and Zoo interchanges in Milwaukee.
The move by the Democratic governor comes nearly three years after former Republican Gov. Scott Walker abandoned the project because he couldn't find a way to pay for it. Since then, Evers and Republicans who control the Legislature have funneled more money into road projects by raising title and registration fees on vehicles.
The state needs permission from the Federal Highway Administration to rebuild I-94 because the federal government will pay for much of it. It got the OK from the federal government to do the project before, but Walker asked to have the federal approval revoked in October 2017 when the federal government warned it was about to withdraw the approval because the state didn't have a way to fund its share of the project.
Evers announced Wednesday he would ask again for approval to rebuild I-94 between 70th Street and 16th Street. Evers said it would create 6,000 to 10,000 jobs, improve safety, cut travel times and boost the economy by allowing for better flow of products through southeastern Wisconsin.
"We know that deferring road maintenance could cost us more down the road and put safety at risk, so getting to work on this project is good common sense," Evers said in a statement.
Transportation Secretary Craig Thompson said that section of I-94 has a crash rate that is 2½ times greater than similar highways.
The stretch of I-94 is difficult to build to the latest safety standards because historic gravesites in the Story Hill neighborhood limit the ability to expand the roadway. Transportation officials at times have considered building a double-decker highway to limit the project's footprint, but Thompson said the state's "preferred option" would not incorporate that feature.
In 2017, officials expected the project to cost nearly $1 billion, but more current estimates were not immediately released Wednesday. Evers and Thompson did not say when they hoped to receive federal approval or when they wanted to begin construction on the project.
Contact Patrick Marley at patrick.marley@jrn.com. Follow him on Twitter at @patrickdmarley.
From: https://www.jsonline.com/story/news/politics/2020/07/08/gov-tony-evers-tries-revive-long-stalled-94-project-milwaukee/5397413002/

"Since then, Evers and Republicans who control the Legislature have funneled more money into road projects by raising title and registration fees on vehicles."
I realized this when I received my registration renewal the other day.  It's gone up to $100 annually.  The swine steal our money and then they don't know what to do with it all:  https://www.jtirregulars.com/2020/07/bice-miller-park-board-left-holding.html  You get paid to produce; these swine get paid to produce nothing but bullshit.
Posted by OrbsCorbs at 10:30 AM