The stadium tax is gone. But Milwaukee-area taxpayers might get a new bill to pay for ballpark's future improvements 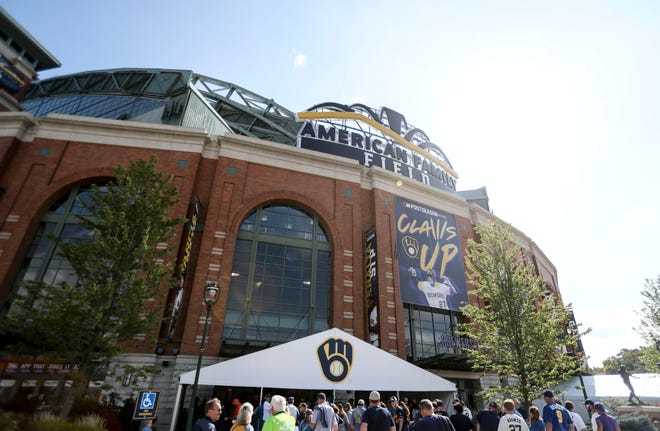 The Milwaukee-area sales tax which helped finance a stadium for the Milwaukee Brewers went away nearly two years ago.

But, area taxpayers might get a new bill to pay for the ballpark's improvements over the next several years.

That's because of obligations spelled out in the lease between the Brewers and the Southeast Wisconsin Professional Baseball Park District — a state-created public agency which owns what is now known as American Family Field.

The Brewers have commissioned a study of  improvements that are expected to be needed at the stadium through 2040. The team's lease runs through at least 2030, although the ballclub has options to extend it up to another 10 years.

That study, to be completed by summer, will include cost estimates for the projects.

If the costs exceed the stadium district's $87 million reserve fund, the difference could be billed to taxpayers in Milwaukee, Waukesha, Ozaukee, Washington and Racine counties, under the lease terms.

To be sure, no one knows yet whether there will be a shortfall.

But, the Brewers are concerned there will be a gap, said Rick Schlesinger, the club's president of business operations.

Any projected shortfall should be immediately addressed, Schlesinger said.

"2030 will be here before we know it," he said at a Monday meeting of the stadium district board.

Schlesinger told board members the Brewers want to stay in Milwaukee through at least 2040. He also said the club doesn't need a new ballpark.

The team, however, does want a ballpark that "is suitable for the next generation," he said.

Schlesinger didn't elaborate on what a next generation ballpark would include.

But, he said, the stadium district's obligations under the lease include changes tied to the evolving standards of other Major League Baseball stadiums.

And, Schlesinger said, 14 MLB teams are planning major renovations over the next five to seven years.

The comprehensive stadium facility assessment is being done after the stadium district declined in 2019 to do its own study, Schlesinger said. Instead, the district board used a less-extensive evaluation, he said.

That was around the time that the district's board was planning an end to the stadium sales tax.

The board voted in March 2020 to drop the tax at the end of that month.

At the time the tax was retired, $605 million had been collected to pay for the construction of American Family Field, previously known as Miller Park, as well as the stadium district’s ongoing financial obligations to operate it.

That population of the five-county tax area is around 1.77 million, so that comes to about $342 of tax collected per person over that 24-year period.

Since the stadium opened in 2001, the Brewers have paid $20.9 million in rent to the district, $112.7 million in capital improvements at the ballpark and $95 million in maintenance and cleaning, said Tyler Barnes, senior vice president of communications and affiliate operations.

Schlesinger said the club isn't seeking a return of the stadium sales tax.

Instead, he said a possible shortfall could involve a creative solution "that involves a lot of stakeholders." He didn't elaborate.

Schlesinger, in response to a question from board Chair Tim Sheehy, also suggested any such process could involve the club extending its lease.

One board member, Frank Busalacchi, said the current lease could result in the five Milwaukee-area counties getting billed if needed improvements at American Family Field cannot be covered by the stadium district's reserve fund.

Busalacchi said it's time for the state to "get out of the stadium business," with the Brewers assuming full responsibility for the ballpark.

Meanwhile, any possible commercial improvements made outside the stadium, similar to the Titletown District near Green Bay's Lambeau Field, would be financed solely by the Brewers.