Justice Department warns California about its coronavirus restrictions on churches

The Justice Department states in a letter that a stay-at-home order doesn't appear to treat churches and other activities the same.

May 19, 2020, 10:51 PM CDT
By Phil Helsel
The Justice Department on Tuesday sent a letter to California Gov. Gavin Newsom expressing concerns about how soon churches will be allowed to resume in-person services and raising Constitutional issues.
The letter takes issue with state plans to allow the resumption of in-person religious services, which is scheduled to start after manufacturing and officework are allowed to resume.
It also cites a past statement from U.S. Attorney Bill Barr that says, "government may not impose special restrictions on religious activity that do not also apply to similar nonreligious activity."
Tuesday's letter also says that the state's stay-at-home order "does not appear to treat religious activities and comparable nonreligious activities the same."
A spokesman for Newsom's office said only that it had received the Justice Department letter.
Newsom said Monday at a news conference that some restrictions on churches, including counseling services and other activities, have been eased, "but for the congregants, that's a few weeks away."
"Not months. Weeks, if everything holds," Newsom said.
He expressed his "deep admiration" to the faith community and its desire to know when congregants can return.

DOJ’s letter to CA Gov. Newsom on civil rights and the covid-19 pandemic.

“We believe that the Constitution calls for California to do more to accommodate religious worship, including in Stage 2 of the Reopening Plan.” 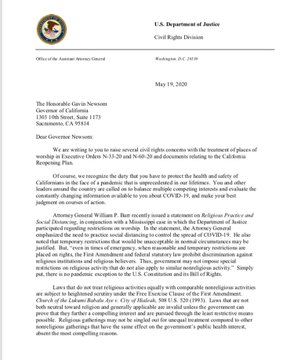 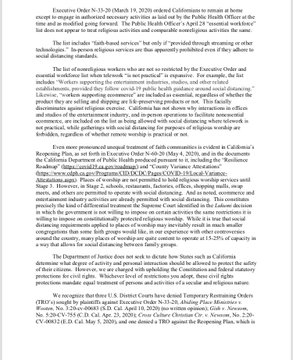 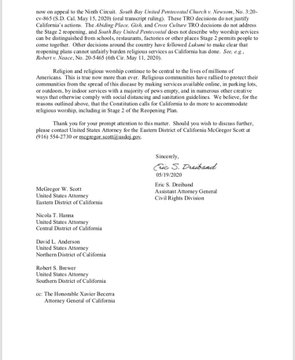 608 people are talking about this
California is starting the process of reopening some areas of its economy and activities following restrictions designed to prevent or slow the spread of the coronavirus illness COVID-19.
The state is currently early in "stage two," which allows curbside retail service and some manufacturing and other activity with restrictions.
In-person religious services, along with hair and nail salons and movie theaters, aren't eyed until stage three, and even then, there will be limits on the size of gatherings, according to published materials on the plan.
Regional exceptions are being granted that allow some counties to go faster into stage two, Newsom said.
The Justice Department letter says that churches can do the same social distancing as businesses.
"We believe, for the reasons outlined above, that the Constitution calls for California to do more to accommodate religious worship, including in Stage 2 of the Reopening Plan," the letter reads,
The Department notes three federal judges have refused to block the restrictions on religious services, but it says that those decisions "do not justify California’s actions."
It is not the first time that the Justice Department has gotten involved in the issue of church restrictions surrounding the coronavirus pandemic.


The department in April intervened in a lawsuit to support a church in Greenville, Mississippi, after churchgoers who attended a drive-in service were fined.
Churchgoers in the Mississippi case argued they were being treated unfairly because others were allowed to go to drive-in restaurants, while they were ticketed for attending a drive-in church service.
The Greenville City Council changed its policy in response, saying the services are OK with windows rolled up, The Associated Press reported.
In Oklahoma, U.S. Attorney Timothy J. Downing earlier this month sent a letter to the mayor of Norman, telling her that her plan on churches "may violate the right to free exercise of religion protected by the First Amendment."
Downing urged the mayor, Breea Clark, to reopen churches sooner. Clark did so and amended her order.
Clark said that the rules for churches and other similar venues were the same, but "I will not spend years feuding with the federal government over one week."
From: https://www.nbcnews.com/politics/politics-news/justice-department-warns-california-about-its-coronavirus-restrictions-churches-n1210926
Posted by OrbsCorbs at 8:20 AM