Posted by OrbsCorbs at 1:09 PM No comments:

I needed a new belt.  My old one was falling apart.  I was tired of pulling up my pants.  I looked online.  Kohl's, which is near my apartment, had belts on sale.  So, off I went.

The place was packed.  I knew what I wanted, but I didn't know where it was.  I'd never shopped here before.  The staff was very polite and cheerful; however, the customers were not.

People were pushing and shoving.  One woman all but drove me down with a stroller.  She came right at me and seemed surprised that I didn't back down.  I told her, "Get the hell out of my way."  She skirted around me.

I finally found the men's belts (in three different locations).  I got my belt and checked out.  Outside, some asshole ignored the stop signs and nearly ran over some shoppers.  Merry Christmas.

Posted by OrbsCorbs at 12:57 PM No comments:

Landmark legal ruling finds that Covid tests are not fit for purpose. So what do the MSM do? They ignore it

By Peter Andrews, Irish science journalist and writer based in London. He has a background in life sciences, and graduated from the University of Glasgow with a degree in genetics.

Four German holidaymakers who were illegally quarantined in Portugal after one was judged to be positive for Covid-19 have won their case, in a verdict that condemns the widely-used PCR test as being up to 97-percent unreliable.

Earlier this month, Portuguese judges upheld a decision from a lower court that found the forced quarantine of four holidaymakers to be unlawful. The case centred on the reliability (or lack thereof) of Covid-19 PCR tests.

The verdict, delivered on November 11, followed an appeal against a writ of habeas corpus filed by four Germans against the Azores Regional Health Authority. This body had been appealing a ruling from a lower court which had found in favour of the tourists, who claimed that they were illegally confined to a hotel without their consent. The tourists were ordered to stay in the hotel over the summer after one of them tested positive for coronavirus in a PCR test - the other three were labelled close contacts and therefore made to quarantine as well.

Unreliable, with a strong chance of false positives

The deliberation of the Lisbon Appeal Court is comprehensive and fascinating. It ruled that the Azores Regional Health Authority had violated both Portuguese and international law by confining the Germans to the hotel. The judges also said that only a doctor can “diagnose” someone with a disease, and were critical of the fact that they were apparently never assessed by one.

The conclusion of their 34-page ruling included the following: “In view of current scientific evidence, this test shows itself to be unable to determine beyond reasonable doubt that such positivity corresponds, in fact, to the infection of a person by the SARS-CoV-2 virus.”  They were also scathing about the reliability of the PCR (polymerase chain reaction) test, the most commonly used check for Covid.

Posted by Clint Teeters at 12:41 PM No comments:

The Biden Presidency Already Has Its First Conspiracy Theory: The Great Reset

Usually, you become president before the crazy starts. But Biden still has weeks to go till he assumes office.

Joe Biden isn’t president yet. But his incoming White House already has its first conspiracy theory to deal with.

It goes by the tag the “Great Reset” and under its construct a wild dystopian future is in store. The coronavirus pandemic is merely a means to enslave humanity and end capitalism. Biden’s “Build Back Better” slogan is really a cover for nefarious plotting of a global cabal from Davos, Switzerland, intent on abolishing private property and building prison camps for the dissenters who refuse to accept microchips that will read their thoughts. Even Grover from Sesame Street might be involved.

Posted by Clint Teeters at 12:34 PM No comments:

Posted by OrbsCorbs at 10:02 AM No comments:

'It shook me:' Racine woman finds out at 62 she was adopted

Posted by OrbsCorbs at 9:51 AM No comments:

Posted by OrbsCorbs at 9:47 AM No comments:

Posted by OrbsCorbs at 9:41 AM No comments:

Posted by OrbsCorbs at 9:29 AM No comments:

Posted by OrbsCorbs at 9:18 AM No comments:

RACINE — Dennis Wiser wore many hats in his 70 years.
He was a City of Racine alderman from 2010 to 2018 and became the first person to serve three consecutive terms as Racine City Council president in at least 70 years.
Then, from July to November in 2017, he served as interim mayor, after John Dickert stepped down and before Cory Mason was elected and sworn in.
He served on the Racine Unified School Board for 12 years, from 2008 to 2020.
He was a retired mathematics teacher who had also previously served as the executive director of the Racine Education Association, the Racine teachers’ union.
On Wednesday, he died unexpectedly.
“He was a tireless public servant: an educator, union leader, alder, School Board member and even an interim mayor. Racine has benefited greatly from decades of Mr. Wiser’s commitment to our community,” Mason said in a statement to The Journal Times.
Read more: https://journaltimes.com/news/local/racine-loses-a-north-star-former-interim-mayor-school-board-member-union-leader-dennis-wiser/article_1e240e81-fc08-5f70-aa3b-f278b95dea2a.html#tracking-source=home-top-story
Posted by OrbsCorbs at 8:53 AM 1 comment:

"A Horrifying Future" - WEF's Vision For A Post-COVID World

Authored by Peter Koenig via GlobalResearch.ca, 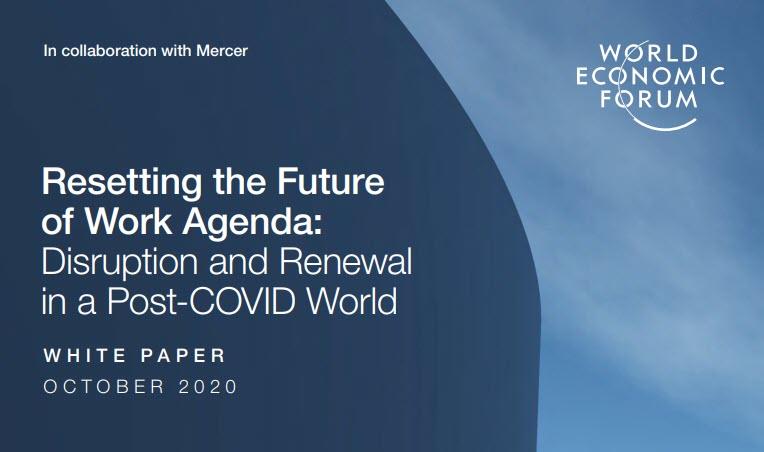 This 31-page document reads like a blueprint on how to “execute” – because an execution (or implementation) would be – “Covid-19 – The Great Reset” (July 2020), by Klaus Schwab, founder and CEO (since the foundation of the WEF in 1974) and his associate Thierry Malleret.

They call “Resetting the Future” a White Paper, meaning it’s not quite a final version. It is a draft of sorts, a trial balloon, to measure people’s reactions. It reads indeed like an executioner’s tale. Many people may not read it – have no awareness of its existence. If they did, they would go up in arms and fight this latest totalitarian blueprint, offered to the world by the WEF.

It promises a horrifying future to some 80%-plus of the (surviving) population. George Orwell’s “1984” reads like a benign fantasy, as compared to what the WEF has in mind for humanity.

This is the what is being put forth, namely the concrete process of implementing The Great Reset. 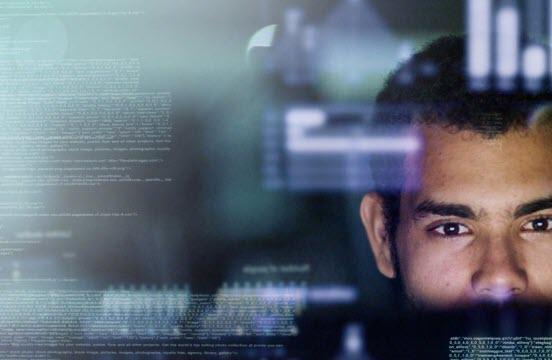 The Great Reset also foresees, a credit scheme, whereby all personal debt would be “forgiven” – against handing over all personal assets to an administrative body or agency – could possibly be the IMF.

Posted by Clint Teeters at 8:42 AM No comments:

Masks Don't Work and It's All Political

Authored by Victoria Taft via PJMedia.com,

There are our betters who ignore the COVID rules and then there are the rest of us.

We’re the people like the Georgia shopper in the tweet below who got hassled at Costco because his son wasn’t wearing a mask. To be clear, the Costco member was wearing a mask but grew upset when store management threatened to toss him out over his kid. The next thing you know, two unmasked police officers were handcuffing the masked father and taking him into custody.

Two standards, no waiting. Unless it’s for toilet paper, Postmates deliveries, or for schools to finally open.

Democrats publicly applaud mask mandates (U.S. Senate Democrats), losses of freedom (Gretchen Whitmer, Gavin Newsom, Chris Cuomo), and cutting off power to your house for having a party (Eric Garcetti). They take pleasure in virtue-signaling to the public about wearing masks, distancing, and not commingling for meals, yet don’t actually follow their own advice when they believe the cameras are off.

Stay separated, they say. Don’t sing or “exert” yourself with others!  But these scolds give away the game when they do nothing and say nothing about antifa and Black Lives Matter screaming, chanting, rioting, looting, and burning things down.

Rules for thee but not for me.

Posted by Clint Teeters at 8:35 AM No comments:

"Dark Winter" - Millions Of Americans Are Expected To Lose Their Homes

A dark covid winter is descending on the working-poor of America as millions of adults face eviction or foreclosure in the next few months. Bloomberg, citing a survey that was conducted on Nov. 9 by the U.S. Census Bureau, shows 5.8 million adults face eviction or foreclosure come Jan. 1. That accounts for 32.5% of the 17.8 million adults currently behind rent or mortgage payments.

On Monday, we noted that on Dec. 31 many of the key provisions in the CARES Act are set to expire if there is no action from Congress. This could be catastrophic for 12 million America who will lose access to their Emergency unemployment benefits activated in the aftermath of the covid pandemic, which alone could be a drag of up to 1.5% to growth in 1Q, according to a recent Bank of America report.

Additionally, the expiration of eviction moratorium, mortgage forbearance programs, and suspension of student loan payments could compound the working poors' financial stresses, many of whom, about 21 million of them, are unemployed and receiving benefits from the government.

The survey points out at least half of households in Arkansas, Florida and Nevada are not current on rent and mortgage payments - equating to 750,000 could face an eviction come early 2021.

On a city by city basis, New York City, Houston, and Atlanta had the greatest threat of evictions come early next year. 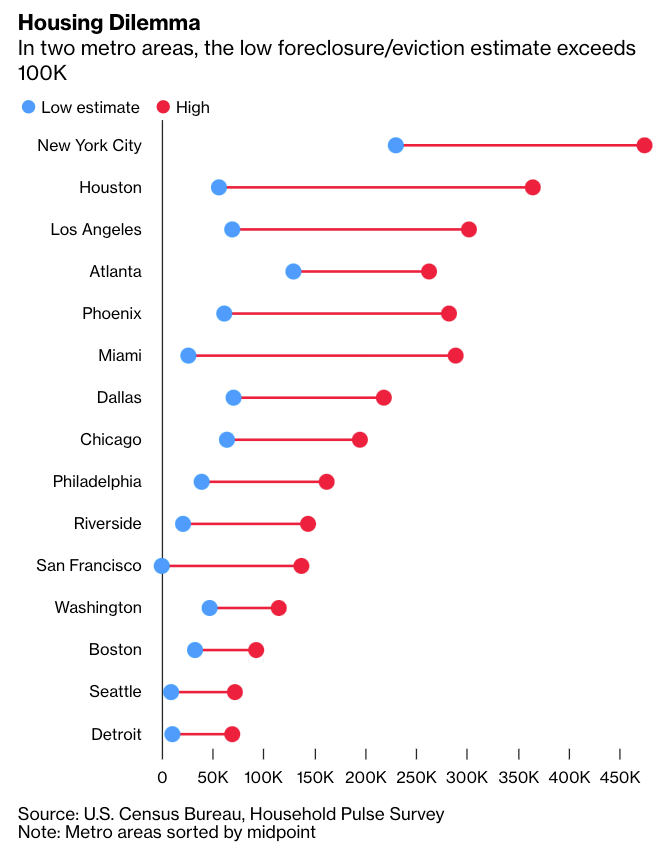 ZEROHEDGE DIRECTLY TO YOUR INBOX

The most concerning part about the expiration of various CARES programs starting on Jan. 1 is that it removes safety nets for the working poor. A lapse from when expirations hit to Congress and the new Biden administration expected to strike a stimulus deal is expected be short-lived. 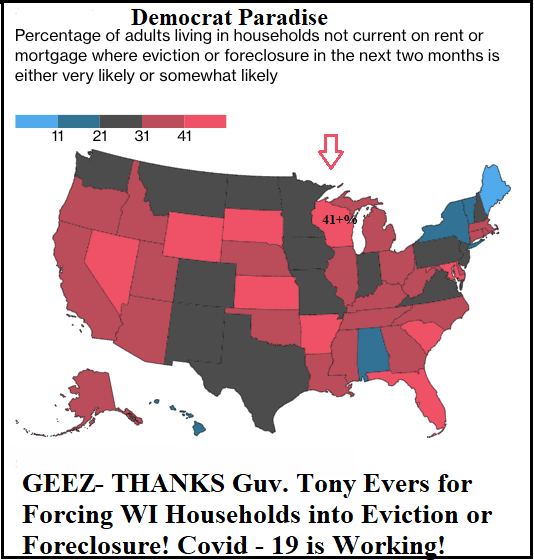 Posted by Clint Teeters at 8:30 AM No comments: