A Racine County judge said he's only sealed one case in his career. The case he chose to hide from taxpayers and Racine city residents? A petition for access to public records.
The unusual case, now on appeal but also absent from the Court of Appeals web-based index, has only come to light because a maverick Racine Common Council member got tired of what she calls growing secrecy and concentrated power in her local government.
"To me, it’s a huge issue," said Sandy Weidner. "I’m willing to defy the judge's order that it’s sealed."
Advocates for open government are astounded and have never heard of a public records suit being sealed, or any kind of case without some record of who the parties are and why it was under seal.
"Everything I know about this case seems atrocious," said Bill Lueders, president of the Wisconsin Freedom of Information Council.
"These communications should never have been withheld. The trial court judge should never have allowed this matter to be adjudicated in secret. His decision should not have been sealed. The appellate court should not have allowed this secrecy to extend to the appeal."
"These are low-level communications from local residents about local issues, not the  Pentagon Papers," Lueders said.
Patrick Kabat, a First Amendment lawyer in Cleveland who leads a First Amendment clinic at the Cleveland-Marshall College of Law, said it's unheard of for a judge to seal an entire case without some public record of why.
"This is not a public records issue, it’s a courts access issue," he said, "and state open meetings law doesn’t control that, it can’t be wished away."
Kabat said his clinic's focus is "reminding courts there are two parties in front of them, but the forgotten third party is the public. And its right is enforceable." 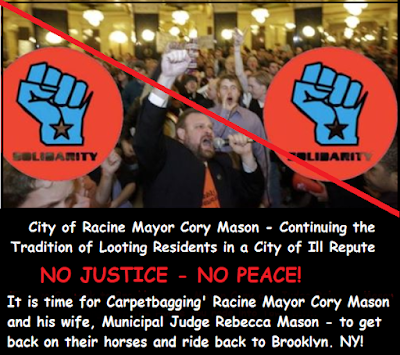 Posted by Clint Teeters at 4:12 PM

Email ThisBlogThis!Share to TwitterShare to FacebookShare to Pinterest
Labels: JSOnline

City of Racine is a criminal enterprise - run by criminals - for the benefit of criminals.