"The JFK assassination: As it happened"

"It has been half a century, and so many lifetimes ago. Yet the images from November 1963 remain haunting, blurred into our national consciousness. Fifty years later, CBS News relives that drama -- in the moment -- as it unfolded before a world in shock."

I've been trying to figure out a way to feature local places, and the idea hit me the other day to connect with Nick, of Rely Local, and see what they're all about. I know the general premise is to help boost local businesses. I want to weekly feature a newer local business, interview the owners and try to help them if I can. I am interviewing Nick, Monday afternoon, thought it fitting to start with him. He's going to give me business info for new places and on down to established places. It's so sad when businesses go out. Stay tuned, I haven't decided what day to do them yet, this could be an interesting journey!
I thought this may be even better than another Best of Racine feature, as I like to know about the places I go to. Let's see where this goes :)
Posted by lizardmom at 11:55 AM 7 comments: 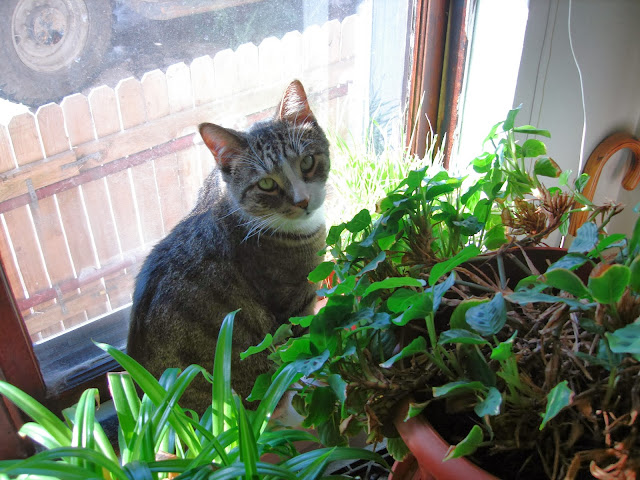 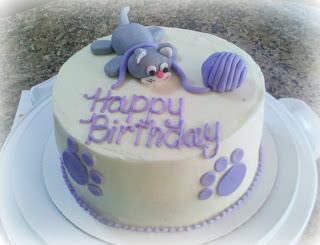 Why aren't male lady bugs called gentleman bugs?
Posted by The Sheriff at 12:00 AM 15 comments:

Because I have a cat, I had to put down an extra two hundred dollar deposit on my new apartment today.  Ten dollars is also added to the monthly rent.  The deposit was already a hundred dollars more than I wanted to spend, as is the rent. Every vehicle I've ever owned, except for my current one, cost less than what I put down.

I think it's time that Charlie starts pulling his own weight.  He needs to get a job.  He'd do well as a window washer:

His preferred position is tuna taste tester, but there's not a lot of call for that.  Do you have any suggestions?
Posted by OrbsCorbs at 11:39 PM 7 comments:

Crapper Mapper: The Toilets of the World Quiz....

This is hilarious, seeing these “toilets of the world,” trying to guess which of the 3 country choices it was from, and the audio of correct versus correct answers.

Email ThisBlogThis!Share to TwitterShare to FacebookShare to Pinterest
Labels: Grins, poop, quiz me

It's that time of the week again... That barrage of questions that we affectionately call Four for Fridays. Ladies and gentleman and fellow Irregulars here are your questions....

1) What makes you feel old?

2) What was the first big thing you bought with your own money?

3) What is the one thing in your past you wish to change?

Enjoy your weekend!
Posted by drewzepmeister at 5:23 AM 12 comments:

It has been a few days since I got out to image Comet ISON but I finally made it out this morning...trying to beat the Moon which will shortly be returning to the morning sky. Much to my surprise, ISON has brightened up quite a bit since Sunday morning. It was easy in 8x42 binoculars and its nucleus is much brighter. Again I set up my Canon 60D with a EF-s 55-250mm zoom lens. The following pic is at 250mm, f/5.6, ISO 5000 and a 90 second exposure.

Not hard to see the bright nucleus and the tail is developing. If you look to the left of the comet, you might notice a faint blue smudge. I believe that is galaxy NGC 4697. I have seen other people post pics from earlier today on the internet (most using telescopes) and I got my smudge in the same place they got a galaxy. I am happy I got it using my less extravagant equipment. Visually, it was pretty easy in 8x42 binoculars and looking good in 20x80s.
I turned my attention to Comet Lovejoy, still riding high in Leo and a very nice site. Pretty much the same settings for this shot as the previous one.

I looked briefly for Comet Encke again but didn't find it this time...I didn't spend too much time on it as it is getting pretty low in they sky. However, the fourth I haven't nabbed yet, Comet LINEAR, was passing close to Arcturus so I went for it. It proved to be very difficult. I barely got it and was debating whether to post this photo at all, but what the hey, see if you can spot the VERY faint blue smudge toward the top of the image above Arcturus (clicking to look at a larger version might help). The comet is slightly left of directly above Arcturus (the brightest star) near the top of the photo. I might go back and add an arrow pointing to it later.

Like I said, not very impressive at all, but I went for it to add a notch to the proverbial comet belt.
The weather may get dicey in Tucson over the weekend and the Moon will soon return to the morning sky, but I will try to get out every couple of days to observe.
On another note, I was on Kitt Peak last night. Lots of photos that I have to put together into time lapses and star trail photos. Busy few days so it may take a while to get to it, but I am looking forward to trying some new things!
Reprinted with permission from the Half-Astrophysicist Blog.
Posted by hale-bopp at 2:28 PM 4 comments:

It's a hardware problem with the computer.  It keeps giving different POST codes.  That's happened a few times in the past, but I blamed it on my battery backup.

I was desperate.  There's a lot of other things going on in my life right now.  I won't say it couldn't get worse, because then the cat would die, the truck would explode, and /or I'd have a stroke.  I went to Milwaukee PC and bought a used Dell; i.e., I put it on plastic.  As the salesman rang it up, I said, "There go my new tires."  He smiled.  I wasn't trying to be funny.

Afterwards, legal stranger called me and told me he has a friend in the computer business who would have given me a much better deal.  Bur that would mean I'd be without a computer for a day or two.  I couldn't take that pressure at this time in my life.  I need this like a junky needs a needle in his arm.

What's done is done.  I'm in the process of updating and installing.  That usually takes a day or two.  I'm hoping to be able to access my old hard drive and transfer a lot of files.

Which brings me, finally, to the point of this blog.  Please email me at my "real" email address.  I don't know that I'll be able to access the email addresses on my old hard drive.  You don't have to write a message or anything.  Send me a blank email.  I just want to capture your address.  Thank you very much.
Posted by OrbsCorbs at 12:47 AM 5 comments:

Email ThisBlogThis!Share to TwitterShare to FacebookShare to Pinterest
Labels: Announcement

Hello, my frigid friends!  How are you?  We’ve had our first snowfall.  I could cry.  It wasn’t much, but it’s a harbinger of what’s to come.  And we’re hitting temperatures in the 20’s.  Brrr.  If you’re not dressed properly for the weather, you’ll feel it soon enough.  The wind the last few days has been horrid.  It almost knocked me over a couple of times.  Pretty soon we’ll have ice to contend with, too. Oh my.

Does anyone really know who the quarterback for the Green Bay Packers is?  One week you’re the quarterback.  The next week, you’re on the injured reserve list.  For the second week in a row, the Packers’ quarterback was taken out by an injury in the first series of the game, which they lost to the Philadelphia Eagles.  Boo-hoo.  I’m crying over the snow and I’m crying over the Packers.  Perhaps there’s a ray of hope with third string quarterback Scott Tolzien.  And now we’ve rehired Matt Flynn to be the backup quarterback.  What goes around comes around?  We’ll see when Green Bay plays the New York Giants this Sunday.  May our beloved Packers become Giant killers.

Oh, how the mighty have fallen!  Ahem.  My Screaming Psychics are now in second place in the Irregular Football League.  Mr. OrbsCorbs’ Orbliterators have dropped to third.  The graphic at right says it all.

New York’s One World Trade Center has just been declared the tallest building in the United States (when it’s finished).  Chicago’s Willis (formerly Sears) Tower held that distinction and still should in my opinion.  One World Trade Center will be “taller” only because of a “spire” which is actually an antenna.  Boo, hiss!

I feel so bad for the people in the Philippines.  Typhoon Haiyan destroyed everything in its path and took many lives.  We should pray for relief.  If you contribute to a charity in the name of the Philippines, check to see how much of their contributions actually make it to the victims.  Some unscrupulous cads will seek to profit from the misery of others.  They set up phony charities and keep most or all of the donated money for themselves.  What a world we live in.  Oh my.

Finally, Wal-Mart has moved up the starting time for their Black Friday sales to 6 pm on Thanksgiving Day.  That’s right; Black Friday starts on Turkey Thursday.  Other major retailers are following suit and setting their openings for earlier times, too.  In a few years Black Friday will start on Halloween.

Thank you for reading my blog today.  I love you all.  You make me feel loved.  That’s symbiotic.

What is the USA’s shortest building?  Find out: madamezoltar@jtirregulars.com

The leaves on streets become very slippery when wet.  Now we could see snow or ice on the road, too.  Be careful, my dears.  It’s always darkest before the Winter Solstice.  Vagitus!
Posted by Anonymous at 2:00 AM 9 comments:

"Our Story In 2 Minutes"

Wow! Thanks to Toad for turning me on to this video.
Posted by OrbsCorbs at 11:01 PM 7 comments:

When you're sick of flying radio controlled model airplanes, try one of these.
Posted by OrbsCorbs at 10:33 PM 2 comments: 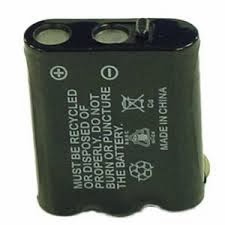 Little info about bringing a rechargeable battery back to life.

I have a cordless phone and it’s been in the drawer for a couple years. I had it on the charger for 4 days and the battery wouldn’t take a charge.

I took my car battery charger and set it on 50amp start; touched the battery for about 5 seconds, 7 times waiting about 10 seconds between and the battery is just like new now.

It charges up and works great.

Thank you to all veterans and to those currently serving our country.
Posted by The Sheriff at 12:01 AM 3 comments: