"The new store was planned at more than 13,000 square feet. A new CVS would have replaced its current store a half-mile east at West and Washington, and that store would close.

"In order to move forward with the project, the Common Council would have had to approve rezoning the parcels to a commercial designation. Several alderpersons opposed the change because the area is supposed to be a buffer zone between the commercial corridor on the west side of the intersection and the residential neighborhoods of Manree Park and West Racine to the east.

"After an August 3 vote denying the necessary rezone request, Alderman Henry Perez introduced a reconsideration measure, but it was defeated Sept. 1 with the 8-7 vote in which Dickert cast the tie-breaker.

"When Racine County Eye reached out to the mayor to ask why he voted against CVS at Ohio and Washington, he said it wasn’t to turn away a business with which the city wants to partner. Instead, it was about preserving the area as the buffer zone it was designed to be.

"'Look, I know people are disappointed, and I hope this isn’t the end of our discussions with CVS,' he said. 'But I voted "no" because I think we could have set ourselves up with a dangerous precedent that would have worked against us in the future.'

"Dickert pointed to the gradual transition along Washington Avenue from commercial to residential and how changing the rules for CVS could open up the 4300 and 4400 hundred blocks to more commercial development which would irreparably alter the neighborhood.

"'What happens if we say "yes" to CVS and then other businesses want to come in and point to what we did there to support their requests to do the same on those other blocks?' Dickert added. 'The change to the neighborhood would be irreversible, and then we’d face similar situations in other areas of the city, and I don’t think, in the end, that our residents want that.'

"Perez – who represents the district that includes the proposed CVS site – disagrees with the mayor. He said he doesn’t see a dangerous precedent and said that was actually discussed early in the process with CVS, but didn’t see a problem because West Racine transitions into a solid commercial district betwesn Blaine and West Blvds."


Party on, lying John!
Posted by OrbsCorbs at 9:37 PM No comments:

If's official now, he's stuck with us for life :)

Our little Ms Froggy got hitched, he's officially stuck with us! 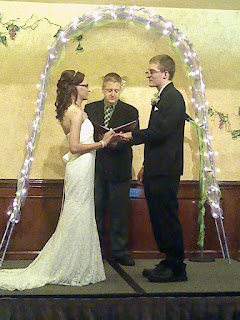 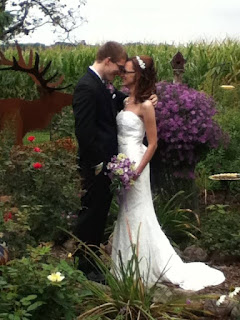 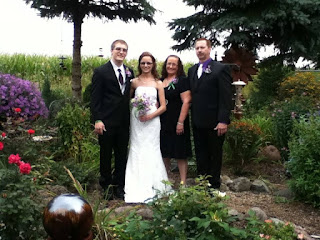 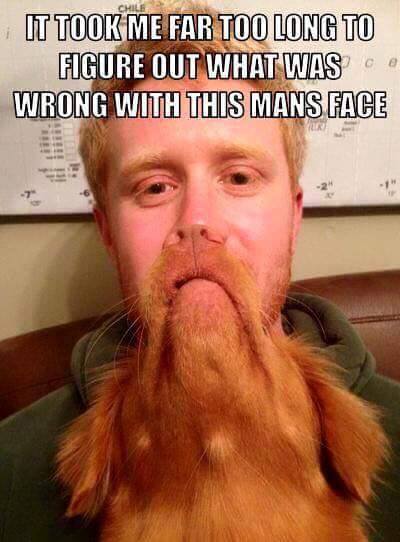 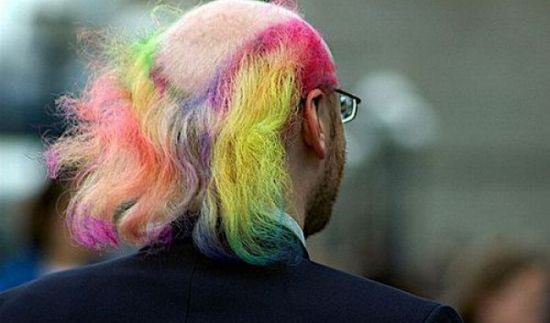 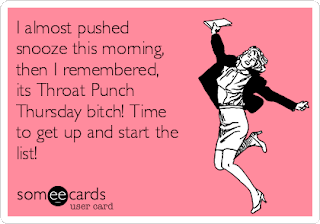 How delightful!
Posted by The Sheriff at 12:00 AM 5 comments: 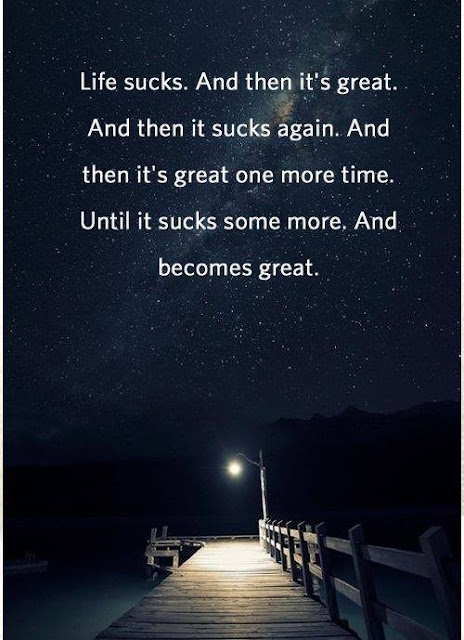 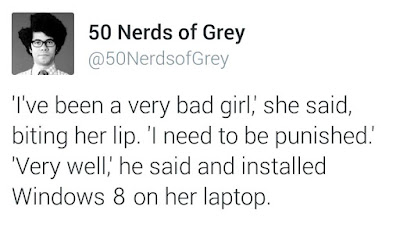 Hello, my Wednesday warriors!  How are you?  The weather has been magnificent.  Too bad we can’t “lock on” to one day and repeat it over and over again, weather-wise.  Here and there I’ve spotted commercial signs of Halloween and it’s depressing.  How about we get through this month first?  I dislike the feeling that I’m being pushed along.  Mr. OrbsCorbs told me that a tenant in his apartment building has a full size skeleton hanging from the front door.  That’s just creepy.  Halloween is a month and a half away.  Officially, it’s still summer.  And you know that as soon as Halloween passes, the Christmas stuff will be out.  It’s difficult to stay in the moment when advertisements by the thousands urge you to think (and spend) ahead.

As I predicted, our glorious and mighty Green Bay Packers made cubs of the Chicago Bears last Sunday. This Sunday, September 20, they beat the Seattle Seahawks in a night game at home starting at 7:30 PM.  Injured or not, Green Bay is a force to be reckoned with. Onward, Christian soldiers!

Amongst the many issues of the day, one sticks out: the police shootings and shot.  Most of the nation seems to be in an uproar about this, one side or the other.  We can’t have our police shooting at everything that moves, but we must have our police shooting when called for.  Although I distinctly denounce the assassination of police officers, I think more needs to be done to improve community policing. Everyone needs to holster his/her gun and take a step back.  We already fought a Civil War.  I don’t want to see another one.

I also wonder about the militarization of the police.  More and more, the police look like an occupying army.  Less and less do the citizens trust them.

When I wonder about such things, I also think of the bid and vote rigging in City Hall.  Although lawsuit after lawsuit has been filed against the city, the corruption keeps eating away at the heart of the city.

Our country needs some serious healing.  Serious.  We have to cut out the cancer of corruption wherever we find it.  When dealing with a dummy, don’t miss the opportunity to teach him/her some new things.  It will take the best of us in the country to bow down and give aid to our brothers and sisters.  We must stress the civility and the truths that we share.  No one else is going to bend back 20 years and help walk our neighbors into the 21st Century.

We need healing and we need time to heal, but the hucksterism has already started for the Presidential Election of 2016.  It will only ramp up more. These are troubled times and I’m not especially fond of living through them.  And the fact is that I don’t believe a word from any of the candidates’ mouths.  We need someone to keep us together rather than driving us apart.  If worse comes to worse, I’ll vote for Mr. OrbsCorbs via his write-in campaign.  He spews foolishness like he is “a member of the absurdist party,” but the fact is that he would do better than 99% of the scoundrels currently running.  He’d actually be concerned about the country and not the big payoffs from special interest groups.

“President OrbsCorbs” has a nice ring to it.  And you, my readers, ring in my heart.  I love visits to my blog.  Thank you for taking the time out of your day to read my blog.  I love you all.

Enjoy the weather while we have it, gang.  Kids are back in school, so watch out for school buses and little legs.  Remember to give thanks for what blessings you have.
Posted by Madame Zoltar at 2:00 AM 4 comments: 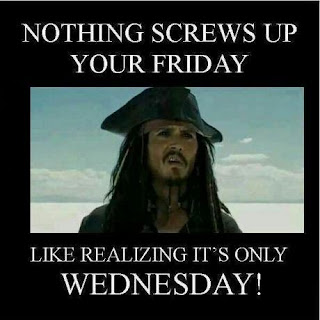 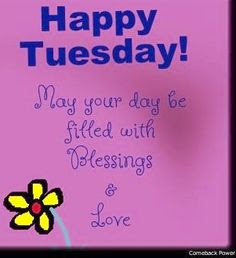 By Rachel Feltman September 14 at 2:44 PM
"Humans are constantly trying to figure out what love is all about — and not just for their own emotional wellbeing. The question of why monogamy exists (and whether it should be humanity's default) is ongoing. In one new study, researchers focused on a socially monogamous bird — the zebra finch — to determine just how important monogamy was for the success of the species.

"The study, published Monday in PLOS Biology, put male and female zebra finches into a room and let them pair up.

"Now let's pause for a second and point out some similarities between humans and zebra finches. Like many humans, zebra finches pair up socially for life. In other words, they form 'marriages' based on child rearing, and they'll stick to one of those forever.

"[Is cheating more ‘natural’ for humans than staying monogamous? It’s complicated.]
"But like humans, that doesn't necessarily mean they're sexually monogamous. Both male and female zebra finches are known to seek out sex elsewhere, to varying degrees."
Read more: https://www.washingtonpost.com/news/speaking-of-science/wp/2015/09/14/new-study-asks-why-birds-fall-in-love/
Dirty birdy.
Posted by OrbsCorbs at 9:26 PM No comments: 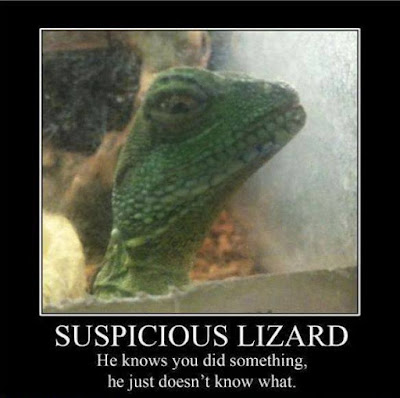 Email ThisBlogThis!Share to TwitterShare to FacebookShare to Pinterest
Labels: Lizard

"Yes, women are descended from cats" 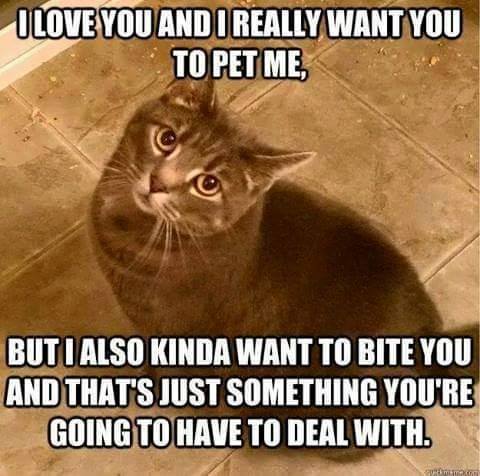 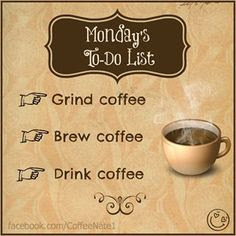 With Coca-Cola or Pepsi, you don't have to grind or brew.
Posted by The Sheriff at 12:00 AM 4 comments:

"Today the nation and the world remember the September 11th terrorist attacks on the 14th anniversary. While we honor the memory of the victims and the first responders who selflessly ran toward danger, one hero also being honored is of the four legged variety.

"A major part of the response in the aftermath of the attacks was the search and rescue teams looking for survivors in the rubble of the collapsed World Trade Center twin towers.  Rescue dogs were a vital part of this operation who were able to sniff for human life. A dog named Bretagne and her owner, Denise Carliss were part of the first wave of responders having been deployed from Texas as part of a national disaster group, Texas Task Force 1. Bretagne will soon turn 16-years-old.

"Bretagne and Carliss in September, 2001"