Southern California Edison said it re-energized a 16,000-volt power line minutes before the Maria Fire erupted nearby last week and quickly swelled to 14 square miles.
The company said in a statement that it had no information about the actual cause of the fire, which broke out Thursday west of Los Angeles, but noted the site is within its service territory.
SCE said it had re-energized the line 13 minutes before the blaze erupted on a nearby hillside. It added that it would "cooperate with the appropriate investigative agencies if asked to do so."
The Maria Fire in Ventura county, which remains zero contained, threatens about 1,800 homes and other buildings, and prompted evacuation orders for nearly 11,000 people.
The fire burned down the sides of a mountain bordered by agricultural land, the small city of Santa Paula and other communities. Airplanes tried to flank it with long drops of retardant while helicopters dropped loads of water.
Utility companies have turned off power: It hasn't stopped fires. What will?
Eastern Ventura, Camarillo, Somis and Santa Paula were at risk, Ventura County fire officials said.
Forecasters have extended red flag warnings for gusts and very low humidity levels to 6 p.m. PDT Saturday for valleys and interior mountains of Ventura and Los Angeles counties, citing the withering conditions.
“As recent fire activity has shown, this remains a dangerous environment for fire growth, even with weaker winds than earlier this week,” the National Weather Service said.
The Maria Fire broke out as the most fierce Santa Ana winds had begun to die down on Thursday.
"It has been an uphill battle ever since," Ventura County Fire Chief Mark Lorenzen said. "We are finding that the winds are starting to change and that presents its own challenges all by itself."
Read more: https://www.usatoday.com/story/news/nation/2019/11/02/maria-fire-utility-says-blaze-began-minutes-after-power-restored/4138057002/
Posted by OrbsCorbs at 10:28 AM No comments:

RICHLAND CENTER — A police chief in Richland County was charged Tuesday with sexual assault and theft after allegedly groping a bartender and stealing her tip money.
Richland Center Police Chief Lucas Clements faces three counts of fourth-degree sexual assault and one count of theft in the incident, which happened June 16, according to a criminal complaint. Each misdemeanor count is punishable by up to nine months of jail time and extended supervision.
The state Department of Justice’s Division of Criminal Investigation investigated the incident.
Surveillance video reviewed by DCI showed Clements inappropriately touched the female bartender multiple times, according to the criminal complaint. The footage does not have audio.
Richland Center Mayor Mike Kaufman said Clements was put on paid leave within 24 hours of the city learning of the incident. Clements remains on paid leave.
Lt. Billy Jones has been appointed as acting chief.
City Council member Todd Coppernoll said the city has the feel of a small town, and many residents were shocked to find out about the allegations against Clements.
“It’s been quite an ordeal for a lot of people. It’s just a really sad turn of events,” Coppernoll said.
Kaufman called the incident “a very large surprise” and said it did not reflect the city’s entire police department.
“It is a shame that an incident like this happened to bring down the entire police department because I think we have one of the finest police departments and sheriff’s departments that you could possibly imagine,” Kaufman said. “These people put their lives on the line for us every single day.”
Whether Clements will be replaced is up to the Richland Center Police Commission, which has a meeting scheduled for Monday. A closed session is on the agenda.
Kaufman said he expects the commission will wait until the conclusion of Clements’ criminal case before making a decision about whether to fire him.
According to the criminal complaint:
Clements entered a bar and restaurant in Richland County around 9 p.m., shortly before its closing. Only a cook and the bartender were still working, and no customers were in the bar, which is not named.
Clements was not in uniform or acting in an official capacity.
The bartender told DCI that Clements appeared drunk when he arrived, but Clements told police he had only had one beer. She served him three drinks.
The woman said Clements started to touch her and make sexual comments to her while they were at the bar area. He then went into an office area, and the woman followed to tell him he was not allowed in there. He also went into the office bathroom.
Video reviewed by DCI showed Clements inappropriately touching the bartender in the office. She said she was also groped in the bathroom.
The woman went in and out of the office area and told the cook multiple times about the unwanted touching and comments, which the cook confirmed with DCI.
After the incident, the woman hid outside by a truck for 20 minutes because “she was scared (and) did not know what to do as the defendant was a cop.”
Read more: https://journaltimes.com/news/state-and-regional/crime-and-courts/richland-center-police-chief-allegedly-groped-bartender-stole-her-tips/article_e31a7d3e-13a9-5fe2-bdd0-d0768eb2159d.html
Posted by Clint Teeters at 8:00 AM No comments:

RAGE AGAINST THE MACHINE!


From: https://arrestrecordsofracinewipublicofficials.wordpress.com/2019/11/02/recall-racine-county-da-trish-hanson-talking-racine/
Posted by Clint Teeters at 7:49 AM No comments:

Posted by Clint Teeters at 7:40 AM No comments:

Posted by Clint Teeters at 7:38 AM No comments:

Eurythmics - Would I Lie to You? (Official Video)

I'll tell you who should be at least 7 Felons:
1. John Dickert
2. Rich Chiapete
3. Jennifer Chiapete
4. Curt Johnson
5. Gerald Ptacek.
6. Rob Weber
7. Sam Stulo
Your comment has been submitted.
ggodmuls
Would I lie to you?

Posted by Clint Teeters at 7:32 AM No comments: 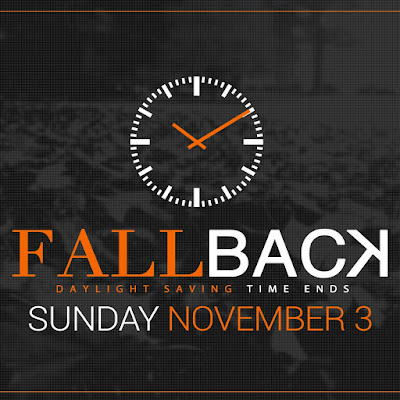 Turn your clocks back one hour before going to sleep tonight.  Daylight Saving Time ends tomorrow morning at 2 AM.
Posted by The Sheriff at 12:01 AM No comments: 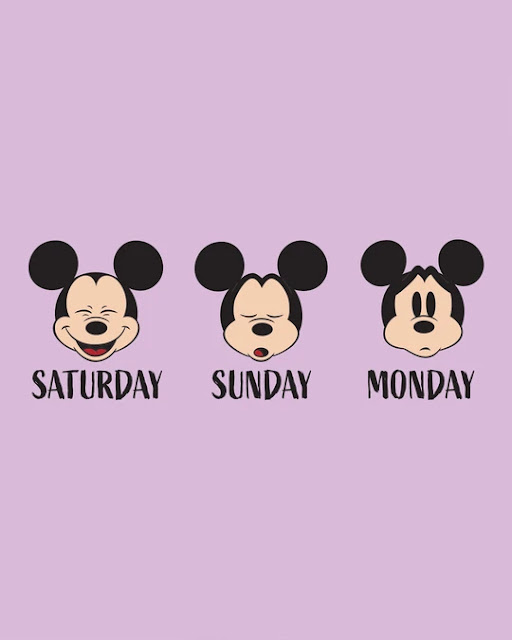 Darn that Monday!
Posted by The Sheriff at 12:00 AM No comments:

Nevada’s Alien Cathouse has always offered an out-of-this world experience to its clients – but now the UFO-themed brothel is set to add an even more futuristic dimension by offering a sex robot alongside its human “courtesans.”
The Cathouse’s Rod Thompson told Daily Star Online why they have added a robot to their line-up: “For clients that have certain… fetishes that courtesans might not be interested in, the robot could fulfil those”
Asked how the Cathouse’s flesh-and-blood denizens felt about working alongside an AI rival, Rod said they were all for it: “The Courtesans are actually excited about the additional revenue stream to Alien Cathouse, and themselves …as well as the additional opportunities that might present themselves for interested parties wanting to party with a real flesh and blood courtesan and with an AI sex robot at the same time.

Email ThisBlogThis!Share to TwitterShare to FacebookShare to Pinterest
Labels: Prostitution

Good morning everyone I hope you are doing alright after the nasty snow we got yesterday. Yes that nasty S word has arrived and I am not happy about that at all. I was just out taking Drew to work and doing some errands this morning and the roads are alright. Here are your questions.

1) Do you barbecue when it is real cold outside?

2) If you do barbecue when it real cold outside do you had an indoor barbecue?

3)  When it is real cold outside would you rather barbecue or just have soup?

4) If you have soup is it homemade or out of a can?

Try to have a great weekend!
Posted by Tender Heart Bear at 7:11 AM 3 comments: 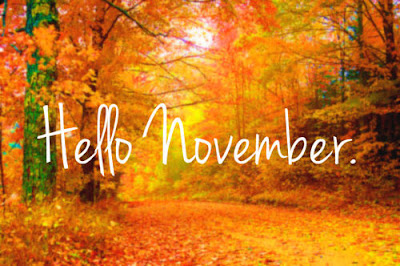 That's beautiful, but I hate the snow and cold that follow it.
Posted by The Sheriff at 12:00 AM No comments:

10 Most Terrifying Movie Characters Ever 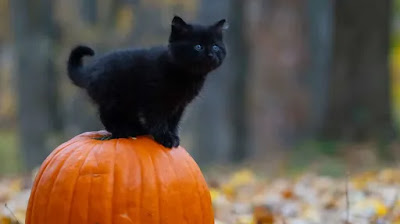 Hello, my friends and lovers!  How are you? Happy birthday to Ms. Tender Heart Bear!  I've been in the Land of Banned.  My ex-, the dreaded Zoltar of machine-made fright, hasn't stopped harassing me even though we've been separated for over 15 years.  He tricked me into the Land of Banned and then he deserted me there.  It was due only to the efforts of Señor Zanza that I was saved.  The police ignored him.  The newspaper didn't care.  No one gave a *shit* where Mme. Zoltar was.  Only my poor Señor Zanza strove on, until he found and rescued me.  Hurrah for Señor Zanza!  I love him!

Well, the weather around here certainly has not improved.  It stinks.  I hate these last days before the snow.  I hate it when it snows for Halloween.  I hate when it snows in October.  I just hate snow.

Below are the standings in the Irregular Fantasy Football League.  As always, click to enlarge: 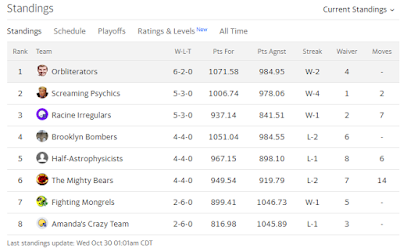 Just for the record, I noticed that the Journal Times online has a new layout and font.  It's pretty, but does nothing to address their lack of journalistic ethics in one of the most corrupt cities in the Midwest.  Hey, JT, grow a pair, please.

I need to rest and recover after my recent misadventures in Banned, so I'm cutting this short.  I just wanted to let everyone know that I'm still alive.

Don't forget to respect each other and put a little love in your heart:

I hope that you have a wonderful day!
Posted by The Sheriff at 12:01 AM 3 comments: 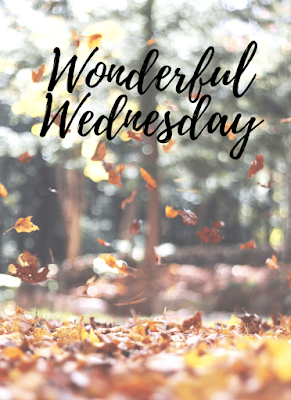 That birdie must be dancing for a mate.
Posted by The Sheriff at 12:00 AM No comments: 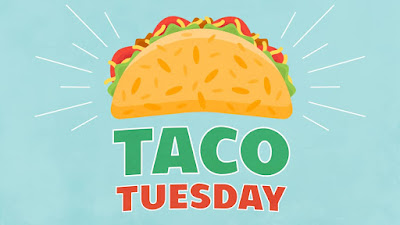 Yum!
Posted by The Sheriff at 1:43 PM No comments:

The Land of Fruits, Nuts, and Flakes is Burning

California's annual wildfires are back despite a series of planned power outages aimed at preventing them - the latest of which is expected to affect as many as 3 million people across huge swaths of the state.
The most intense fires raged through Sonoma County, with some 180,000 residents ordered to evacuate.
"The next 72 hours will be challenging," Gov. Gavin Newsom said on Saturday. "I could sugarcoat it, but I will not."
As of midnight, Sonoma County resembled a disaster zone.
Highway 101 was closed indefinitely through Santa Rosa as wind gusts of up to 93 mph were reported by the National Weather Service in Healdsburg Hills in the northern part of the county. That said, the NWS now reports that the winds will "start to reduce compared to the peak experienced in the last few hours, but remain strong today with a ramp up tonight."
As of 7:15 a.m. the Kincade fire near Geyserville had grown to 30,000 acres according to Cal Fire, and is 10% contained. It has destroyed 79 structures and threatens over 31,000 according to the SF Chronicle.
At least two wineries have burned in the blaze; the Soda Rock Winery and the Healdsburg winery.


As of Sunday morning, PG&E confirmed that it had blacked out over 1 million customers, corresponding to roughly 3 million people. 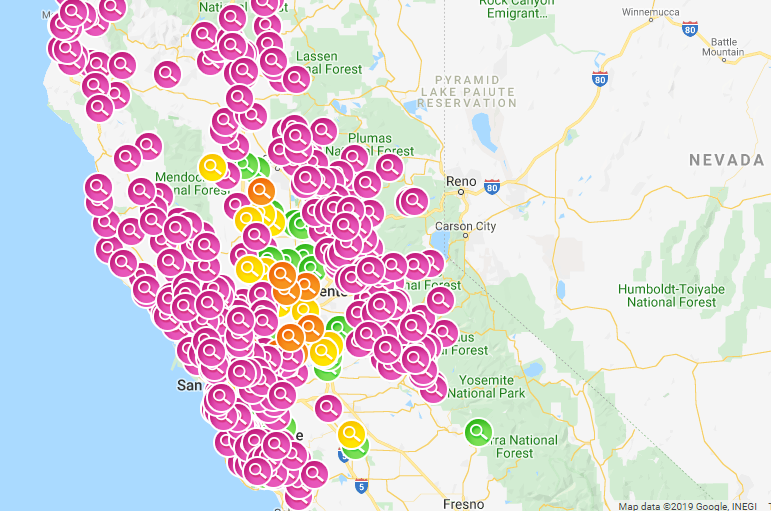 The outages are unprecedented in scope — larger even than the controversial PG&E shut-offs that affected more than 2 million people earlier this month. Blackouts extending from the far North Coast and the northern Sacramento Valley down into the Sierra Nevada foothills, throughout much of the Bay Area and in parts of the Salinas Valley and Kern County.
In the North Bay, where the Kincade Fire is raging in northeastern Sonoma County, the impact is acute. Much of Sonoma County is subjected to the shut-offs, and in neighboring Marin County, officials said they expected virtually every customer to lose power. -SF Chronicle

This marks the third massive outage in one month, and the second in one week.
"These are difficult calls," Newsom added at a Napa press conference. "But a society as industrious and entrepreneurial and innovative as ours should not have to face a choice between public safety and public blackouts. We can do both together. And that is what path we are on."

From: https://www.zerohedge.com/energy/california-fires-spark-mandatory-evacuations-wineries-burn-winds-hit-93-mph
Posted by Clint Teeters at 10:33 AM No comments: