Hello, boys and girls, moms and dads too!  We've finally hit some continuous cool weather.  It's November on the weekend after the next.  It's still just fall, though.  Nothing to get excited about.  Erp.  When the snow flies, I'll be pissed off.  Not the first few light (usually) snowgs, but when it starts to interfere with my life, regularly, then I know: it's winter.  The one season I wish would go to hell is winter.  I know it's needed by nature to sustain the cycle of growth.  Well, like Mr. OrbsCorbs say, "What will be, will be."  Also, "Give it your best shot and then relax." 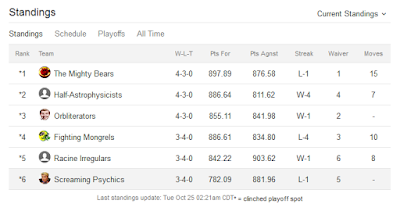 Oh dear, I'm at the bottom of the list.  We'll have to fix that.

Our honorable Green Bay Packers kicked the asses of the Chicago Bears last week.  This Sunday, October 30, the Packers slam into the Atlanta Falcons in Atlanta, at 3:25 PM.  Bye-bye Birdies.

Mr. OrbsCorbs is recovering nicely from whatever it was that caused him to lose 2-1/2 weeks of his life.  He says he remembers bits and pieces, that's all.  When he came out of it, he says his apartment looked like a bomb had gone off.  I wonder if he wasn't under an evil spell?  It's hard to tell sometimes when he is speaking the truth or not.  But this seems to have rattled his cage good.  He's afraid of growing old.  So, what's the alternative?  He's more afraid of that.

Ms. Tender Heart Bear made sure he was fed and taken care of.  She's so sweet.  She's one of Mr. OrbsCorbs' angels.

Actually, we're all angels.  We just don't know it yet.  Or, some of us may be demons, which would explain a lot.  The same old fight for millennia: good vs. evil.  I grow tired of it.

Thank you all for stopping by to read my blog today.  I love all of my readers, Irregular or not.  We just may not know it.  I appreciate and thank God for you.

Have a notion, need a potion?  Ask madamezoltar@jtirregulars.com

Enjoy the cool weather.  Soon we'll be stuck inside for most of the time.  Arrgh.  I can't take it.
Posted by Madame Zoltar at 2:00 AM

No snow! No snow!

Thanks for another memorable blog, Mme. Z.

Welcome back to reality
It really does suck
But hey.....that's life !

I'm so sorry to hear about orbs! Sounds awful.. I have been lost in a haze of work, home renovation, childrens aktivities and trying to keep up with my mom that is here visiting..

I hope orbs is feeling alright, and thank you madame for a wonderful blog.