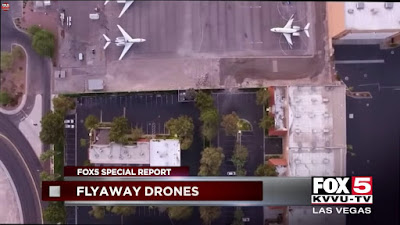 Drone pilot Reuben Burciaga was fined $20,000 by the Federal Aviation Administration (FAA) after his fly-away DJI Phantom 3 drone landed right next to an active runway at McCarran International Airport in Las Vegas. The drone incident took place in June of 2018 when Burciaga wanted to take an aerial photo of a Ferris wheel. Early on during the flight, he lost control of the DJI Phantom 3. The drone then slowly drifted for more than two miles towards the airport before landing right next to an active runway. The FAA issued the ‘careless and reckless” drone pilot a fine of $14,700 that increased to around $20,000 after Burciaga failed to pay or appeal on time. We have included the original video of the drone flight that was uploaded by Burciaga below.

It is illegal to fly a drone over or near the strip in Las Vegas as it is within 5 miles of McCarran International Airport. Only Part 107 licensed drone pilots with special permission from the FAA would possibly be allowed to fly there. This, however, did not stop Burciaga, a tourist from California to launch his DJI Phantom 3 to take a photo of a nearby Ferris wheel.
Reuben Burciaga explained his action to Fox 5 KVVU-TV as follows:

“You know what, I really want to get a picture of this Ferris wheel. I’m gonna try it one more time. I went up to the parking structure in a far corner of Ceasar’s Palace. Took it off. No problem with GPS. Once I was comfortable with the GPS lock, I took it forward towards I believe it was the LINQ. I got about to the strip and that’s when I started losing GPS. When I lost control is when it started acting all weird and it just took off. And it never gave me an opportunity to make any type of adjustments.”

After the pilot lost control, the DJI Phantom 3 then drifted over two miles at an altitude of 450 feet towards McCarran International Aiport where it landed only a few feet away from an active runway. Airport workers found the unmanned aircraft and turned it over to the FAA.
Initially, the FAA had some trouble finding the drone pilot as the registration number on the aircraft was labeled incorrectly.
FAA spokesperson Ian Gregor said that:

“Our investigators got a little bit creative and started transposing drone numbers into the system and lo and behold that’s when the drone popped up in the registry. And we were able to link it back to the owner.”

The FAA then sent a letter to Reuben Burciaga listing nine violations including:

Gregor continued to explain that:

“This is really a very serious incident which is why we impose such a large fine. In this situation, the pilot committed to a litany of serious violations and really flew the drone carelessly and recklessly. An incident like this could’ve resulted in a plane hitting the drone or in disruption of airport operations or in injuries to people walking on the strip if it had crashed there. It was very fortunate that it ended up crashing where it did and didn’t cause any damage or injury. But this individual did not respond to any of the letters we sent him and did not avail himself of the appeals process so the time to appeal expired without him ever filing one.”

In the interview with Fox 5 KVVU-TV, Reuben Burciaga said that:

“I was really apologetic to them because I understand that’s serious. You know, an airplane full of people. That’s dangerous.”

About the hefty fine he said:

“My drone flew away after loosing [sic] GPS, drifting 4 miles away landing at McCarren airport when Trump was in town and [the] drone was intercepted by secret service. Even after showing it was a system failure I was still fined 15,000!!!”

If President Trump indeed was in town at the time of this fly-away, it would mean that a TFR must have been in place which would make flying a drone even more irresponsible.
According to the news outlet, the fine is now in the hands of the US Treasury Department that will look to pay the fine out of any money that is owed to Burciaga such as social security benefits or income tax returns.


Here’s the video of the DJI Phantom 3 drifting away and landing at McCarran International Airport.

What do you think about Reuben Burciaga’s drone flight in Las Vegas and the subsequent fine from the FAA?