Protesters continued to gather and demonstrate against COVID-19 vaccine mandates and restrictions in Canada’s capital on Feb. 6, marking the one week anniversary of the so-called "occupation."

“We are on day eight of this occupation. Our city is under siege. What we’re seeing is bigger than just a City of Ottawa problem. This is a nationwide insurrection. This is madness. We need a concrete plan to put an end to this,” said the chair of the board, Ottawa City Council member Diane Deans, at the beginning of the nearly two-hour-long virtual discussion.

Ottawa police chief Peter Sloly agreed with her portrayal of the situation, saying that local law enforcement was “never intended to deal with a city under siege,” and decried the lack of resources – and legal authority – to disperse the protest.

At one point, Deans wondered whether the city had legal grounds to declare an unlawful assembly and then a riot, in order to conduct mass arrests, instead of pursuing “one criminal charge at a time.”

“There are so many people out there engaged in a broader act of… mayhem, that we need to be able to bring it all under control,” she said.

“We can’t allow this kind of terrorism in our community to continue this way.”

Yes, in accordance with the narrative laid down from Trudeau's twitter feed, the establishment is now calling protesting truckers - terrorists! 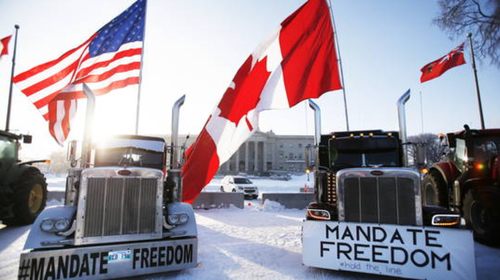 And as a result of all that hysteria, The Epoch Times reports that Ottawa Mayor Jim Watson has declared a state of emergency due to the trucker protest that continues in the city’s downtown core.

In a brief statement, the city said the decision reflects the “serious danger and threat to the safety and security of residents posed by the ongoing demonstrations and highlights the need for support from other jurisdictions and levels of government. ”

“It also provides greater flexibility within the municipal administration to enable the City of Ottawa to manage business continuity for essential services for its residents and enables a more flexible procurement process, which could help purchase equipment required by frontline workers and first responders,” the city said in its statement.

Protest organizers say their demonstration is peaceful... apart from this terrible, awful, horrific, terroristic attack on a good, honest, local citizen who was just trying to cross the road...

The protest started as a demonstration by truckers against the federal government’s requirement for cross-border truck drivers to be vaccinated, but has since evolved into a large movement joined by people from across Canada to oppose different COVID-19 mandates and restrictions. Vehicle convoys came to Ottawa on Jan. 29, and many have stayed in the city, with trucks and other vehicles parked by Parliament Hill. Many protesters say they will remain until the mandates are lifted. 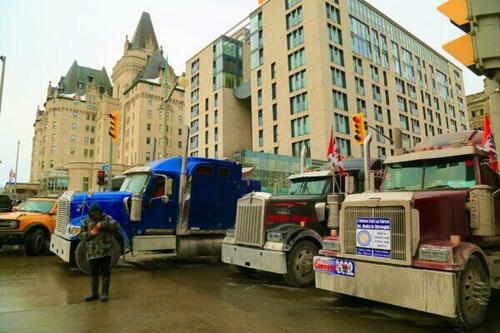 Sounds of honking horns can be heard throughout the day in the Parliament Hill area, which residents are complaining about.

Protest organizer Benjamin Dichter says people who are unhappy about the honking should be contacting Prime Minister Justin Trudeau and ask him to lift COVID-19 mandates.

“To anybody who is annoyed, we apologize. Please call Justin Trudeau, his office, and get these mandates lifted, and we’re out of here,” Dichter said at a press conference in Ottawa on Feb. 6.

Trudeau has refused to meet with the protesters.

Tom Quiggin, who is helping the organizers with “protective intelligence,” said many people across Canada have lost their jobs, homes, and businesses as a result of COVID-19 mandates and restrictions, and they have grievances too, which is why they are protesting in the nation’s capital.

“Let’s remember most of Ottawa is government, huge number of civil servants here. They haven’t missed a paycheque. They’ve got pay raises, some of them have got back pay, most of them are working from home. Some of them who can’t work from home are just doing nothing and still getting paid,” Quiggin said at the press conference.

Daniel Bulford, a former RCMP officer who quit the force because of its vaccine mandate and is now helping the protest organizers, said his children don’t want to play hockey anymore because of the position his family has taken on vaccine issues, as they feel “isolated and alienated.”

Posted by Clint Teeters at 2:22 AM