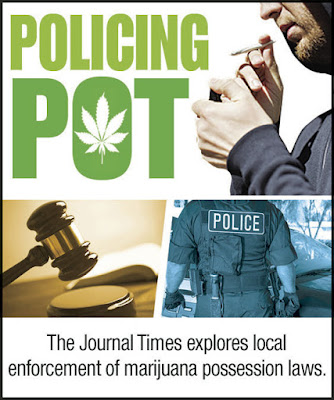 "Approaching the car, he sees a 27-year-old man sitting in the driver’s seat smoking what appears to be a joint. A few minutes later, after recovering 1.4 grams of marijuana, he issues the man a municipal citation.

"Six months later, another Racine police officer conducts a traffic stop near Racine and 13th streets. The male officer calls for a female officer to search the 25-year-old driver. Before that female officer arrives, the young woman behind the wheel confesses to having two small 'baggies' of marijuana in her pocket, a total of 1.7 grams of pot.

"This time, instead of issuing the offender a citation, the officer writes up a report requesting that she be charged with the criminal offense of misdemeanor marijuana possession, a state charge.

"Racine ostensibly decriminalized the possession of marijuana for personal use in 1990 when it created a local ordinance making possession of 25 grams or fewer of the substance a forfeiture.

"A Journal Times review of minor marijuana possession cases handled by Racine police in 2016, however, found that officers were more than twice as likely to request criminal charges for offenders found with 25 grams of marijuana or less, than they were to issue citations."


Fuck marijuana laws.  Alcohol has killed millions.  Pot = none.
Posted by OrbsCorbs at 11:20 AM

The Journal Times - a rag of an advertisement paper without a journalist and
difficult to navigate online.

RJT is no longer worth reading

Pot = none? Real scientific there aren't you. How many lives has it ruined by killing all motivation? That alone cost many lives.