RUBEN VIVES, ANDREW CAMPA
An airplane returning to Los Angeles International Airport on Tuesday morning dropped jet fuel onto a school playground, dousing several students at Park Avenue Elementary School in Cudahy, officials said.
Delta Flight 89 — a Boeing 777 — had taken off from LAX with more than 140 passengers on board and was en route to Shanghai when it turned around and headed back to the L.A. airport.
“Shortly after takeoff, Flight 89 from LAX to Shanghai experienced an engine issue requiring the aircraft to return quickly to LAX,” Delta said in a statement released Tuesday night. “The aircraft landed safely after a release of fuel, which was required as part of normal procedure to reach a safe landing weight. Delta is in touch with Los Angeles World Airports and the L.A. County Fire Department as well as community leaders, and shares concerns regarding reports of minor injuries to adults and children at schools in the area.”

Shortly before this plane landed at LAX, it dumped what's believed to be fuel on an elementary school playground, hitting several students. LA County Fire said 70+ are on scene assessing multiple patients https://www.latimes.com/california/story/2020-01-14/plane-dumps-fuel-on-students-on-school-playground-en-route-to-lax-officials-say … 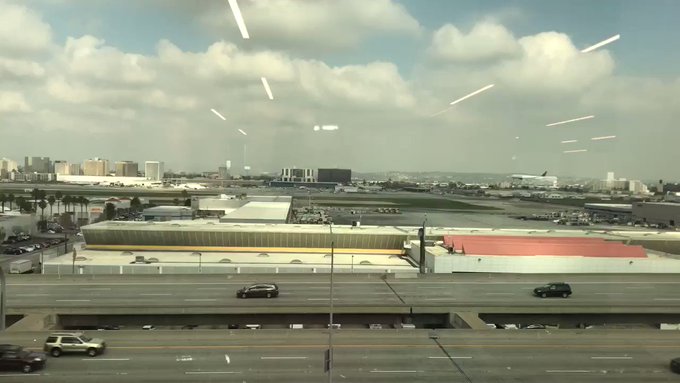 826 people are talking about this
The plane is 20 years old and makes daily flights from Los Angeles to Shanghai. In recent weeks, the plane had also made trips out of L.A. to Paris and Tokyo.
According to Flightradar24, Tuesday’s flight never got above 8,000 feet, and was at about 2,300 feet when it passed over the school at 11:53 a.m.
The flight is typically a 13-hour nonstop. This one lasted about 25 minutes.
At 11:47 a.m., an LAFD firefighter radioed that they were responding to a call at LAX.
“We have a Boeing triple 7, call sign Delta 89, reporting a compressor stall, 181 souls on board, 12 hours of fuel, ETA less than five minutes,” an LAFD firefighter said.
When the compressor of a plane’s engine stalls, it can cause the loss of airflow through an engine, which can cause the engine to fail.
Passenger Tim Lefebvre, a bass guitarist headed to China for gigs, was sitting at the front of the plane when he heard loud popping sounds.
“It was kind of right next to me,” Lefebvre said. “I knew that wasn’t good. The pilot came on a couple minutes later and said we were going back to LAX, and that was that.”
The pilot told passengers that there had been an engine problem and that they shouldn’t be alarmed if, when the plane landed, they saw firetrucks on the runway, Lefebvre said.
Everyone on board remained calm, although the flight attendant seated near Lefebvre looked concerned, he said.
“Just imagine if we had been over the Pacific a good distance,” Lefebvre said. “That would not have been good.”
Read more:: https://www.latimes.com/california/story/2020-01-14/plane-dumps-fuel-on-students-on-school-playground-en-route-to-lax-officials-say
Posted by OrbsCorbs at 9:33 AM

AT least it wasn't feces - which might contain germs, viruses, bacteria, etc.

This being LA - it probably mitigated a lot of head lice & bed bugs.