MADISON - Some voters may be asked to lower their masks before they cast ballots this fall so poll workers can make sure they are the person on their photo ID, election officials said Thursday.
Meanwhile, those who refuse to wear masks at the polls will be allowed to vote, despite a mask requirement that kicks in on Saturday, they said. That's because election officials can't impose new conditions on the right to vote.
Members of the state Elections Commission reached those conclusions Thursday during an emergency meeting they held just hours after the Democratic governor issued his mask order to help combat the coronavirus pandemic.
His order — similar to ones issued in nearly three dozen other states — creates new issues voters and election workers will have to address during the Aug. 11 primary and Nov. 3 general election.
Some Republican lawmakers have raised the prospect of voting down Evers' mask order or trying to get a court to overturn it.
Evers issued the mask order in conjunction with the declaration of a public health emergency. Eliminating the emergency declaration could make it difficult or impossible to use National Guard members as poll workers, said Ann Jacobs, the chairwoman of the commission.
Many clerks had difficulty getting their usual poll workers to take shifts during the April election for state Supreme Court and they relied on the National Guard to take on those duties.
"The declaration of a public health emergency allows the governor to call up the Guard and assign them to voting," said Jacobs, a Democrat. "And if he's not able to do that, there's a risk that we have Guard personnel for August or November."
The commissioners — three Republicans and three Democrats — unanimously recommended that voters wear masks at the polls. But they said they could not stop anyone from voting if they didn't wear one.
"There are individuals who aren't wearing masks because they fit into one of the exceptions," said Commissioner Dean Knudson, a Republican. "Maybe they have a health condition that they're not supposed to wear a mask. Maybe just through their version of their civil liberties, they believe they shouldn't have to wear a mask. And at the polling place they shouldn't be challenged about this and they shouldn't have to be adamant about it. They should be just left alone about it."
The commissioners said poll workers should be able to identify many voters on their IDs even when they are wearing masks. But when they cannot, they can ask voters to briefly lower their masks, they said.
RELATED:Here's what we know so far about the Wisconsin statewide mask mandate
Contact Patrick Marley at patrick.marley@jrn.com. Follow him on Twitter at @patrickdmarley.
From: https://www.jsonline.com/story/news/politics/2020/07/30/voters-may-have-lower-their-masks-so-poll-workers-can-identify-them/5541156002/
Posted by OrbsCorbs at 8:14 AM 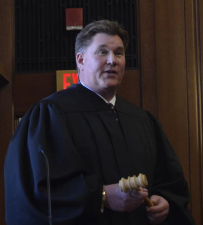