While Edwin Santiago Jr. DOB 01 – 1986 claims 1466 Douglas Avenue as his residence for Official purposes, on 12-17-2020 his address was claimed to be 1244 Lasalle St, Racine, WI 53404 for his Guilty Due to No Contest Plea where he was cited for Speeding in Outlying District (20-24 MPH). Source: Racine County Case Number 2019TR008698 County of Racine vs. Edwin Santiago Jr AND Racine County Public Official Directory.

On 02/20/2021 Police arrested Racine District 4 alderman Edwin Santiago Jr. who was booked into the Racine County Jail and released. According to a police report obtained by WISN 12, an officer tried to pull a driver over for speeding. But instead, the officer said the man behind the wheel hit the gas at 80 mph and took off down Douglas Avenue into Racine. The report said when Santiago finally pulled over, at gunpoint, the officer took him into custody. The report noted the alderman "smelled of intoxicants, had slurred speech and watery eyes." It also said Santiago's wife, a passenger in the car, was "heavily intoxicated." The district attorney has not formally charged Santiago. As of 02/27/2021 no charges have yet been filed. Source: WISN 12 News and Wisconsin Court System. 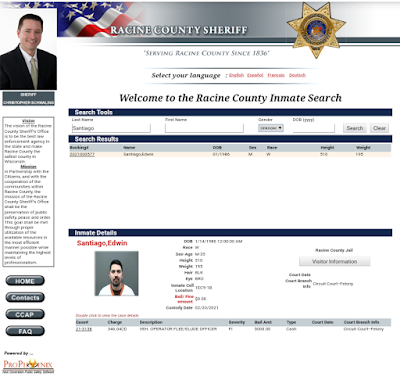 Posted by Clint Teeters at 9:31 AM

and FUCK YOU! McMayor Butterball.

Santiago is a stupid scumball
Only two council members have any integrity.