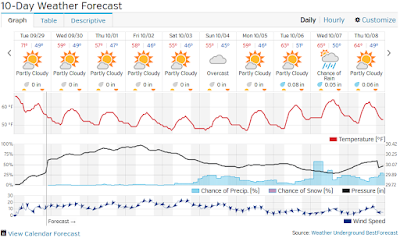 Hello, my chilled children! How are you?  Guess which way our temperatures are headed? Today I noticed some dead leaves blowing around.  A harbinger of things to come.  At least I don't have to rake up the leaves.  I leave that to Junior and Señor Zanza.  Men are good for more than just one thing.  (Not a whole lot, but more than one.)  The fellow who owns the home across the street from ours has a Norway Maple in his front yard.  A mature one.  When his tree drops its leaves, they're like roofing shingles, thousands of them.  If he didn't rake them up, his small house would be buried. He can't afford to play the waiting game in the hope that the wind will take care of most of the job.  He's out there regularly during the fall, raking, always raking.

Our valiant and audacious Green Bay Packers took care of the Kansas City Chiefs handily on Monday night.  Next up:  the San Francisco 49ers, at Frisco, this Sunday, October 4, at 3:25 PM  The Packers will mash the 49ers into a ball of Rice-A-Roni, "the San Francisco treat."

As far as the Irregulars Fantasy Football League, I have no idea as I forgot to check on them last week.  I'll get to them as soon as I finish this blog.  Hopefully, I can give you weekly updates from then on.

Someone forwarded a piece of email my way today.  It's a small part of Mr. Mayor Dickert's deposition in the big lawsuit against the city: 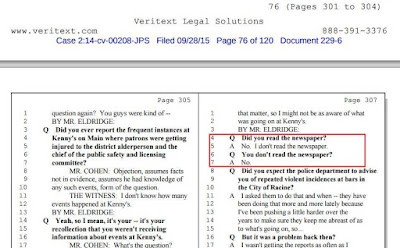 I'm kind of surprised that Mr. Mayor doesn't read the Journal Times.  He's written commentary pieces for the paper in the past.  Is it a good idea, as mayor, to not read the local newspaper?  Does the Journal Times know about this?  Does anyone believe that Mr. Mayor "Lying John" is telling the truth?  How could such a vain man not read about himself in the local press?  As soon as the Journal Times got a new publisher, he teamed with Mr. Mayor to create a facsimile of some sort of "Ten Year Plan."  But Mr. Mayor "Lying John" didn't read it? He always said the plan was in his head and perhaps Mr. Mayor was afraid to see what they found in there.

I don't know about you, but I'm kind of sad that the summer is over.  I feel like I didn't participate in enough events.  There's so much going on in the Racine area in the summer, that it's hard to choose sometimes which activity to attend or participate in.

Did anybody go to Party on the Pavement?  How was it?  It's usual y a good time.

And it's time for me to wrap this up.  Thank you so much for reading my blog today.  I welcome everybody and anybody to jump on the Zoltar bandwagon.  I make a lot of noise.  That's to wake the dead.  Many of them still go to work and their homes in Racine.

Enjoy the cool, crisp weather.  Say good-bye to summer and hello to autumn.  The days grow shorter.  Grab what you can.  Watch out for school buses and kids.  And don't forget to watch out for yourself.
Posted by Madame Zoltar at 2:00 AM

Madame- For fantasy football you are in second place, Drew has first place.

I have never gone to party on the pavement. When I'm not forced to be in a large group of people, I enjoy the quiet time alone. Thank you for sharing your thoughts, Madame. Are you having your annual Oct. 31st party this year? You invite such interesting guests. Please remember me.

I looked at your weather and all I can say is, brrr. We are in the 80's today and then down into the 70's for a while.

Madame as always, thank you for your blog.

There's a great gift idea for lying John: a subscription to the Journal Times. Or maybe the city could score a grant to pay for a daily paper.

I saw the flying leaves too. Pretty soon our trees will be bare. Time for a hot chocolate and a warm blanket!

OMG, where are my manners?

Thank you, Madame Zoltar, for another fine blog.