"'What The F— Is That Thing?': Fast Moving UFO Stuns U.S. Navy Pilots"

Stunning video captured by U.S. Navy pilots in 2015 shows a mysterious object with "no obvious wings or tails," and "no exhaust plume" traveling at a high rate of speed over the Atlantic Ocean "very low over the water."
The declassified Department of Defense (DoD) video was released by analytics firm The Stars Academy of Arts and Science - whose advisory committee includes former Clinton and Bush Deputy Assistant Secretary of Defense for Intelligence, Christopher Mellon.
“What the f— is that thing?” shouts the pilot of a U.S. Navy F/A 18 Super Hornet equipped with a Raytheon AN/ASQ-228 Advanced Targeting Forward-Looking Infrared (ATFLIR) pod - one of the most advanced imaging devices in use by the military which can locate and designate targets at distances over 40nm.


The unidentified vehicle appears as a white oval shape moving at high speed from top right to lower left of the screen flying very low over the water.   Initially, the sensor is unable to capture the object.  The Weapon Systems Operator (WSO) steers the sensor ahead of the object to attempt another capture.  On the third attempt, the sensor tracking capture is successful.   The sensor is now in “autotrack” mode, where the sensor uses contrast and other parameters to lock-on to a target, automatically keeping it centered in the sensors viewing frame. -TTSA


Specifically noted by the TTSA;

Is the Pentagon ignoring UFOs. Why?
After the New York Times offered the clearest official footage of a UFO encounter in history last December - along with a secret $22 million Pentagon program to analyze unidentified flying objects, it's been crickets from the media.


"the footage from a Navy F/A-18 Super Hornet showing an aircraft surrounded by some kind of glowing aura traveling at high speed and rotating as it moves. The Navy pilots can be heard trying to understand what they are seeing. “There’s a whole fleet of them,” one exclaims. Defense officials declined to release the location and date of the incident."

As former Clinton and Bush Deputy Assistant Secretary of Defense for Intelligence, Christopher Mellon, writes in the Washington Post, the silence from the Pentagon in addressing what is clearly more advanced technology than what is publicly known - be it aliens or a foreign government - is deafening.


In December, the Defense Department declassified two videos documenting encounters between U.S. Navy F-18 fighters and unidentified aircraft. The first video captures multiple pilots observing and discussing a strange, hovering, egg-shaped craft, apparently one of a “fleet” of such objects, according to cockpit audio. The second shows a similar incident involving an F-18 attached to the USS Nimitz carrier battle group in 2004.
The videos, along with observations by pilots and radar operators, appear to provide evidence of the existence of aircraft far superior to anything possessed by the United States or its allies. Defense Department officials who analyze the relevant intelligence confirm more than a dozen such incidents off the East Coast alone since 2015. In another recent case, the Air Force launched F-15 fighters last October in a failed attempt to intercept an unidentified high-speed aircraft looping over the Pacific Northwest. -WaPo

"Is it possible that America has been technologically leap-frogged by Russia or China?" posits Mellon. "Or, as many people wondered after the videos were first published by the New York Times in December, might they be evidence of some alien civilization?"
"Unfortunately, we have no idea, because we aren’t even seeking answers."
Mellon says that thanks to his years working in the Clinton and George W. Bush administrations that the military treats these incidents as isolated events rather than part of a pattern warranting investigation. Mellon's colleague, Luis Elizondo, "used to run a Pentagon intelligence program that examined evidence of “anomalous” aircraft, but he resigned last fall to protest government inattention to the growing body of empirical data."
Reports from separate services and agencies remain "largely ignored and unevaluated" says Mellon, who says there is no process at the Pentagon to analyze reports across agencies. Fox Mulder would shake his head...
Incredible feats
Mellon notes that there's ample evidence from official government sources of various unidentified craft performing mind-boggling aerobatics.


In one example, over the course of two weeks in November 2004, the USS Princeton, a guided-missile cruiser operating advanced naval radar, repeatedly detected unidentified aircraft operating in and around the Nimitz carrier battle group, which it was guarding off the coast of San Diego. In some cases, according to incident reports and interviews with military personnel, these vehicles descended from altitudes higher than 60,000 feet at supersonic speeds, only to suddenly stop and hover as low as 50 feet above the ocean. The United States possesses nothing capable of such feats.
On at least two occasions, F-18 fighters were guided to intercept these vehicles and were able to verify their location, appearance and performance. Notably, these encounters occurred in broad daylight and were independently monitored by radars aboard multiple ships and aircraft. According to naval aviators I have spoken with at length, the vehicles were roughly 45 feet long and white. Yet these mysterious aircraft easily sped away from and outmaneuvered America’s front-line fighters without a discernible means of propulsion.

After speaking with senior Pentagon officials on the topic, Mellon notes "nobody wants to be “the alien guy” in the national security bureaucracy; nobody wants to be ridiculed or sidelined for drawing attention to the issue."
UFO parts sitting in Las Vegas?
Perhaps one of the most glazed over aspects of the New York Times' December piece on UFOs is that of a $22 million joint project between billionaire entrepreneur Robert Bigelow, who is currently working with NASA to produce spacecraft.
Bigelow is an associate of Harry Reid (D-NV, retired), who has long had an interest in space phenomena.

On CBS’s “60 Minutes” in May, Mr. Bigelow said he was “absolutely convinced” that aliens exist and that U.F.O.s have visited Earth. -NYT

Contracts obtained by The Times show a congressional appropriation of just under $22 million beginning in late 2008 through 2011. The money was used for management of the program, research and assessments of the threat posed by the objects.
The funding went to Mr. Bigelow’s company, Bigelow Aerospace, which hired subcontractors and solicited research for the program.

And the kicker:
"Under Mr. Bigelow’s direction, the company modified buildings in Las Vegas for the storage of metal alloys and other materials that Mr. Elizondo and program contractors said had been recovered from unidentified aerial phenomena."
"the storage of metal alloys and other materials...  recovered from unidentified aerial phenomena"
Let that sink in...
Moreover: "Researchers also studied people who said they had experienced physical effects from encounters with the objects and examined them for any physiological changes. In addition, researchers spoke to military service members who had reported sightings of strange aircraft," reports the NYT.
“We’re sort of in the position of what would happen if you gave Leonardo da Vinci a garage-door opener,” said Harold E. Puthoff, an engineer who has conducted research on extrasensory perception for the C.I.A. and later worked as a contractor for the program. “First of all, he’d try to figure out what is this plastic stuff. He wouldn’t know anything about the electromagnetic signals involved or its function.”
For those who have long said "I want to believe" when it comes to UFOs, the U.S. military has released enough official footage in the last six months alone to make believing much easier. 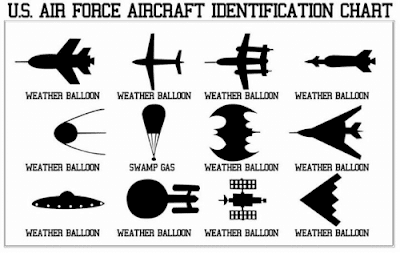 Posted by Clint Teeters at 7:37 AM