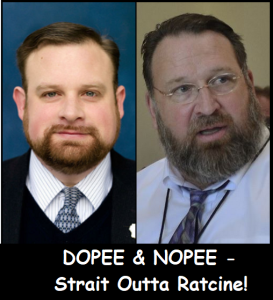 Once again, City of Racine is being sued. This time it is over alleged fraud which was committed during the failed John Dickert/Cory Mason $65 million Machinery Row Development. The Judge has reviewed the Complaint, and while the questionably competent and potentially malfeasant City Attorney Scott Letteney asked for a dismissal – the Judge DENIED the dismissal, meaning that the suit is going forward and taxpayers will once again BOHICA. Taxpayers ALWAYS pay the bills for incompetent City Employees.
The Crew over at Talking Racine has a video on this development, see:
https://youtu.be/WsZAKJDM_GE
In addition, a copy of the lawsuit may be reviewed at this link:
https://issuu.com/communicatornews/docs/samamendcomplaint
Just remember – this lawsuit is going forward – Once again – the City’s request for dismissal was DENIED. Now the Common Council must decide whether to defend or settle.  No matter their decision – taxpayers will once again BOHICA – the Common Council can only now minimize the damage. I suggest they do so – because Cindy and I are sick and tired of paying for their poor decisions and failure to confront malfeasant and questionably competent Mayors – from Becker – to Dickert – to Mason.
There are now 5! that’s FIVE in the Mayor’s Office – and yet here the City is – being sued for FRAUD! What in the World are they doing in the office all day? Or is 5! in the Mayor’s office a jobs program for Family & Friends.
City of Racine Common Council Alderpersons need to *WAKE UP* and smell the coffee.
When will former Mayor John Dickert and Mayor Cory Mason be criminally charged for all their malfeasant and criminal acts?
Once again – it is yet another black eye for City of Racine – and it’s gonna cost the taxpayers huge amounts to defend the indefensible – please, let the Common Council  choose the least cost option – admit the guilt and settle.
Cory Mason must resign – or the Common Council needs to have him removed from office – for the role he played in bringing this lawsuit. The Mayor’s position must be eliminated – as the City only needs one, or perhaps two in the City Administrators position. That is a positive solution to the problem of 5! incompetents holding positions in the Mayor’s Office.
Honest, Open, and Transparent Government must be restored! No more Razzle – Dazzle con-men like John Dickert and Cory Mason.

From: https://arrestrecordsofracinewipublicofficials.wordpress.com/2019/12/06/fraud-lawsuit-filed-against-city-of-racine/
Posted by Clint Teeters at 7:37 AM