Update (2225ET): Tear gas is flowing in Minneapolis as night 2 of the George Floyd protests begin:
*  *  *
Update (22:00ET):  The protests that started yesterday in Minneapolis over the death of George Floyd, and escalated today including the looting of at least one Target store, have sparked a violent anti-police protest in LA with thousands blocking the 101 Freeway and attacking cop cars.
And not only are they refusing to obey Governor Newsom's social distancing rules, hardly anyone is wearing a mask! 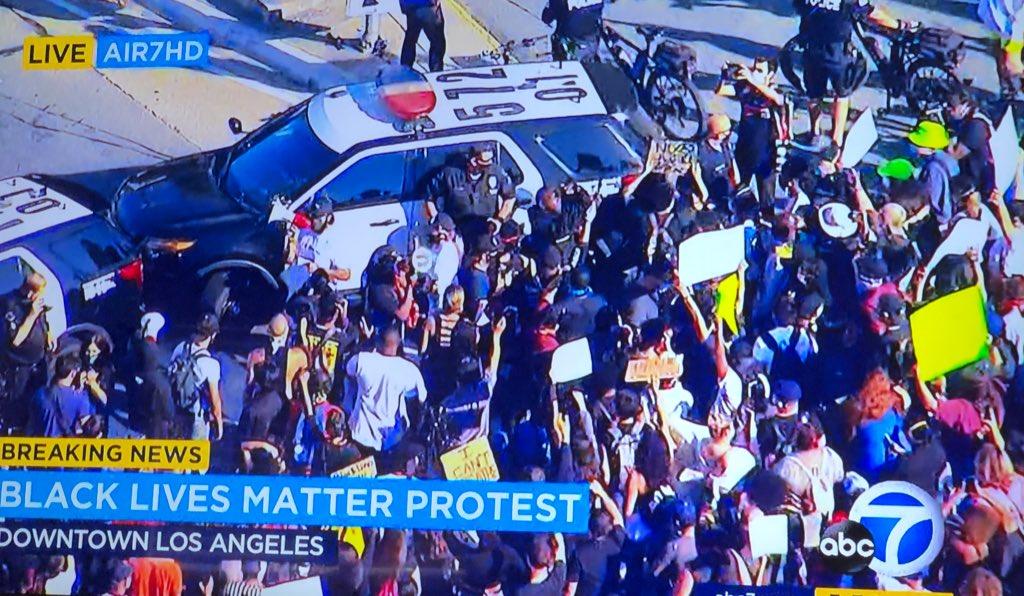 * * *
Update (20:00 ET): Social unrest continues to worsen on Wednesday evening as protesters smash the windows of a local Target and have now started to loot the store.
FOX 9 Minneapolis-St. Paul's Karen Scullin is documenting the breaking story:
Video emerges of inside the Target
WCCO CBS Minnesota posts a "raw video" showing scenes outside of the Target
Watch Live: Protests continue in South Minneapolis in response to the death of George Floyd
Live at riot in Minneapolis Minnesota
Here's another live feed of the chaos
The situation is quickly deteriorating in Minneapolis -- as the next big threat, as we highlighted earlier today, is that unrest could spread to other cities, such as Baltimore...
* * *
Update (11:55 ET): Former vice president Joe Biden has been vocal about the death of George Floyd in the last 24-hours. Videos had surfaced on the internet of Floyd pinned to the ground by police officers shortly before he died on Monday.
Here's the video of the incident
On Tuesday night, during the protests in Minneapolis, Biden tweeted: "George Floyd deserved better and his family deserves justice. His life mattered. I'm grateful for the swift action in Minneapolis to fire the officers involved — they must be held responsible for their egregious actions. The FBI should conduct a thorough investigation."
Biden was heard on a virtual meeting with Pennsylvania Gov. Tom Wolf Wednesday morning, where he addressed the death of George Floyd.
Axios provides a breakdown of what was said (Biden referenced the 2014 death of Eric Garner, an unarmed black man who died after a New York police officer used an illegal chokehold on him during an arrest):
Here's Biden speaking
* * *
High unemployment, crashed economy, and now social unrest rears its ugly head as America descends into chaos ahead of the summer months.
Across social media, pictures and videos coming from the streets of Minneapolis on Tuesday evening are absolutely stunning. Protests broke out following the death of George Floyd, a black man who died in police custody a day earlier.
This reminds us of the 2014 Ferguson Riots and 2015 Baltimore Riots, in both incidents, the trigger for unrest was a young black man killed while in police custody. Unlike 2014/15, the economy has now plunged into a depression and tens of millions of people are unemployed, as some have to resort to food banks because they've fallen into instant poverty, which all suggests tensions are already running high as warmer weather entices people to step outside. With no work, why not riot?
Shown below, police fired rubber bullets, tear gas, and stun grenades at protesters. The initial demonstrations started peacefully than quickly got out of hand. Some hurled blunt objects at law enforcement while damaging police cars.
The early hours of the protest were peaceful, hundreds, and maybe even more than a thousand people, were seen marching across 38th Street. Some carried signs that read "Justice for George Floyd," "I can't breathe," and "Black Lives Matter."
The size of the demonstration quickly increased in the late evening.

ZEROHEDGE DIRECTLY TO YOUR INBOX
Receive a daily recap featuring a curated list of must-read stories.
CNN's Omar Jimenez tweeted: "You could say there’s a bit of a crowd gathering in Minneapolis." 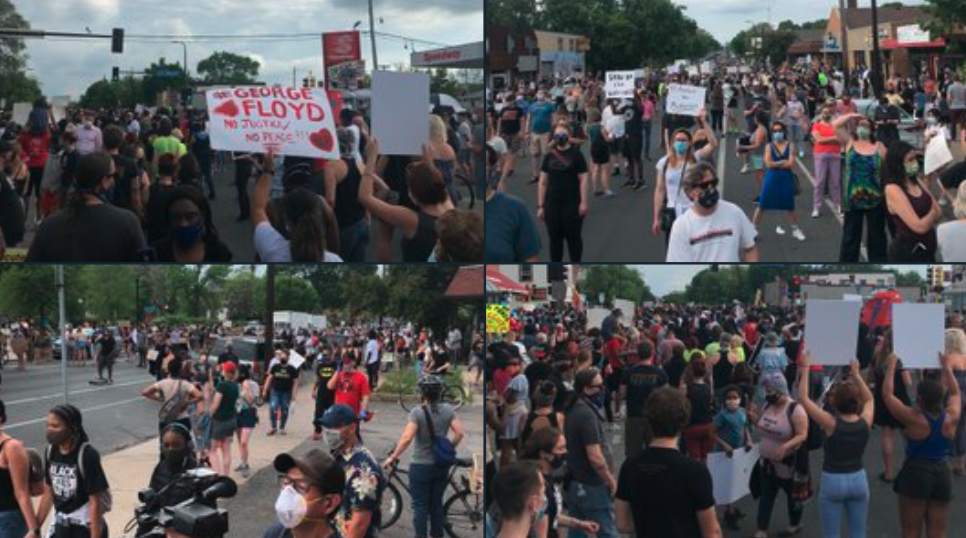 "It's real ugly. The police have to understand that this is the climate they have created," a protester told WCCO-TV.
U.S. Rep. Ilhan Omar, D-Minnesota, tweeted: "Shooting rubber bullets and tear gas at unarmed protesters when there are children present should never be tolerated. Ever. What is happening tonight in our city is shameful. Police need to exercise restraint, and our community needs space to heal."
In late March, we described how "social bomb" could flare-up in the Western world, and even reported that President Trump signed an executive order that allows for the call-up of up to a million troops. Why so many soldiers? Well, we're not entirely sure, it could be due to threats of social unrest that are usually seen in economic downturns.
Now here's a big risk: If unrest spreads to other cities, like Baltimore, where tensions against police are already high, then it appears the Trump administration has a major problem on their hands ahead of the election.
From: https://www.zerohedge.com/political/its-real-ugly-protesters-clash-minneapolis-police-following-george-floyds-death
Posted by Clint Teeters at 5:51 AM