It was a warm sunny day, so what better time to hit the beach?
Evidently that's what Happy the hippo figured, because the Milwaukee County Zoo's 39-year-old male spent much of Wednesday cooling off in his new pool.
That was not all that surprising, since hippopotamuses are known to spend around 16 hours each day in the water. What was different were the zoo visitors watching Happy up close as he luxuriated in his private watering hole.


Kids and photo-snapping parents stood a few inches away from Happy, separated by glass in the zoo's recently-opened Dohmen Family Foundation Hippo Haven.

With two large front teeth looking as if he had just chomped down on lemon Popsicles, Happy watched the humans watching him, occasionally sticking his nostrils above the water surface to snort some air. Sometimes he closed his bulbous eyes underwater, but more often he gazed with interest at the transfixed zoo-goers.
The Milwaukee County Zoo's hippos have always had a swimming pool, but it was much smaller and difficult for visitors to see them — except for an occasional glimpse of a head or rump as they moved around.
Read more: https://www.jsonline.com/story/news/2020/07/24/zoo-unveils-new-hippo-habitat-featuring-large-underwater-viewing-area/5475706002/
Posted by OrbsCorbs at 8:49 AM

Submitted by legal stranger : ‘Do not argue or fight with the criminal – do as they say,’ reads police email IMAGE CREDITS:  BRANDON... 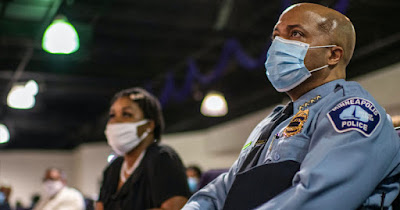