Great Lakes Brew Fest, which the city kicked out of Festival Hall so that the Journal Times could hold their Home Expo there, was held at the Racine Zoo yesterday and today.

I drove past Brew Fest today on my way to and from mom's. I have never seen so many people converge on the Zoo. N. Main Street was almost impassable at points. Cars and buses were parked everywhere. Lines of people snaked down N. Main and Goold Streets, waiting to get in. There had to be thousands. I snapped some quick pics as I drove past: 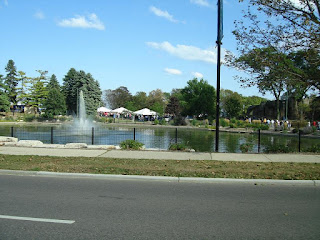 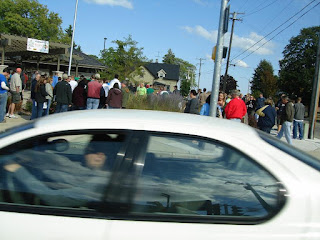 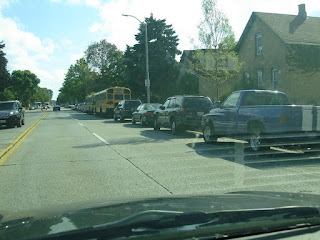 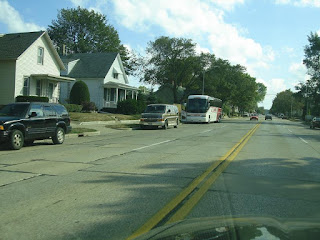 Meanwhile, this was the scene at Home Expo: 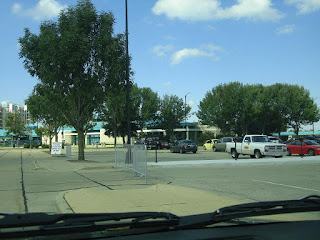 Congratulations to Dickert and the Journal Times for once again ignoring the will of the people of the City of Racine, Wisconsin.

Posted by OrbsCorbs at 7:23 PM

wow, was it really that dead at the home expo?!?!? wow.. I'm glad that the Brew fest seems to be a success.. was thinking of going there with my dad but the tickets were 40 dollars.. a bit out of my price range, so we went to the opening day at Jerry Smiths pumpkin farm instead..

I went to a brewfest in Milwaukee a couple of years back. It is expensive to get in, but it was a BLAST. They offered free food, there were bratwurst and a varying type of sausage sandwiches, samples of cheese, chocolate, etc. There were tons of different brewers, tables set up with information, musical performances... a very good time and worth the hours of entertainment. You could also sample as much as you wished. I found a fabulous orange blossom cream ale by a small brewer.

One thing that has now been cut out are the micro brews by non-corporate brewers. I guess there is a law preventing them from serving anywhere except the location where it is brewed. Too bad... some of those were the neatest ones to sample, very different and imaginative. I do understand the potential for food-borne illness, but has that ever happen in the history of any brewfest? These guys who "show" their craft are maniacs who are committed to cleanliness and perfection.

Yes, orbs. Another blunder made by management to stifle something positive happening in Racine.

Gee, I didn't know it was $40. And they still got all those people.

kk, I didn't think they cut out microbrews, per se, only home brews.

I'm not sure of the technicalities. My brother, the malt chemist would be able to tell me more. He told me that this has been a long time battle of the big guy worried about the little guy cutting into their profits. Just as in any other market, they have had sole control of profits. Some of the larger corps have been trying to buy out the successful mom and pop microbrewers.

It was my understanding that if they weren't a specialty (micro-brew) of a larger company like Leinenkugle or Coors, they weren't allowed off location. I could be wrong?

More of the bigger companies are now marketing specialty brews under the microwbrew guise. They specifically don't want them associated with their larger conglomerates because they sell better with the microbrew mystic attached.

Good advertising, I didn’t even know the Home Expo was this weekend although I knew the Brew was going on.

Orb's, That's a great story. Funny how things work. Who the hell would go to a Home Expo, unless they were handing money out to pay taxes?

kkdither, The best place to get food borne illiness Is from vegetables. They don't close the grocery store produce departments do they? Funny how things work.

I read that, but I still think there is a subtle nuance of who and what define home brew. It isn't just some shmoe who is brewing in the bathtub who is not allowed. In fact, I don[t recall anyone offering what we would traditionally think of as home brewed products.