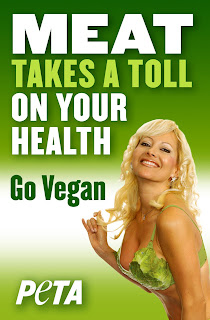 
"Press release from PETA
Group Proposes Paying to Keep the Streetlights Shining in Return for Pro-Vegan Message
"For Immediate Release:
March 13, 2012
"Contact:
Kristin Richards 202-483-7382
"Racine, Wis. — PETA has sent a letter to Racine Mayor John Dickert with an offer the group hopes he can’t refuse: Allow PETA to place a banner featuring one of PETA’s bikini-clad 'Lettuce Ladies' and reading, 'Get Lighter: Go Vegan,' on two streetlights located on Jerome Boulevard, and PETA will foot the bill for keeping the lights on for an entire year. Currently, because of city cost-cutting measures, residents are shelling out the annual fee of $335 to keep the two streetlights operating. In its letter, PETA points out that in addition to causing animal suffering on a massive scale, the meat, dairy, and egg industries are making Americans sick and that studies show that people who’ve gone vegan are significantly healthier and slimmer than meat-eaters are.
“'PETA’s ad would help keep Jerome Boulevard residents safer, healthier, and "lighter"—in more ways than one,' says PETA Executive Vice President Tracy Reiman. 'And residents who heed the lifesaving message of PETA’s lovely Lettuce Lady could also help keep animals safe from the clutches of the cruel meat, dairy, and egg industries.'
"For more information, please visit PETA.org."
Read more, including PETA's letter to Mayor Dickert, at: http://racineuncovered.org/2012/03/petas-sexy-lettuce-lady-wants-to-help-racines-jerome-boulevard-residents/

I think this is a fantastic idea. We could sell advertising space all over our light and telephone poles. Maybe even revive Burma Shave signs. And the more "Lettuce Ladies" and the like, the more likely that male drivers will slow down. Some beefcake could be hung up out there to keep the ladies satisfied, too.
Posted by OrbsCorbs at 10:50 PM

Orbs...I have this sudden urge to have a salad for lunch...go figure. lol

This is the best idea ever. Just think of the possibilities.