Hi, gang!  How are you?  I hope you're staying warm in this turn towards winter.  Senor Zanza has cold feet in the bed.  He holds them against me to warm them.  I don't appreciate such acts.  I tell him to wear socks to bed, but he says then he can't fall asleep because he still feels "dressed."  One of these nights I'm going to wear my shoes to bed.  Then when Senor Zanza applies his cold tootsies to me, I can give him a kick in the can.

Uh, the Packers.  Well, I don't want to seem like a fair weather fan, but I gave up when Aaron Rodgers broke his collar bone.  He broke his other one a couple of years ago.  I remember someone commenting when Green Bay was first negotiating with Rodgers that he is injury prone.  23 screws.  They should have let me treat him.  I'd have grabbed some aliens from a nearby planet and let them work their healing powers on him.  He'd be throwing the football the next day.  Anyway, the Packers host Detroit on Monday night, November 6 at 8:30 PM.  Go Packers....

Here are the standings from the Irregular Football League: 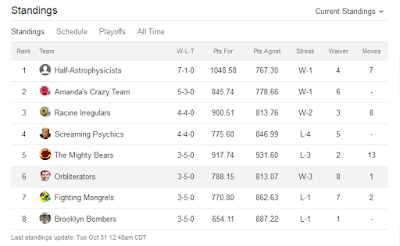 It looks more and more like Donald Trump received help from Russia in his presidential campaign.  Why can't suits ever play fair?  Trump's entire administration so far has been a cruel joke on the American people.  As soon as an allegation is made against Trump, he tries to change the conversation to someone else's misbehavior.  He is child-like that way.  Holy Twittering Tweets, Batman!  We have a kid running the most powerful nation on Earth.  He likes to tweet.  Unfortunately, one-liners and attacks on perceived enemies will not lift this great nation.  I am ashamed that he is our president, and I would be just as ashamed had Hillary won.  Between the Democrats and the Republicans, I don't know who lies the most.

It is noted in today's Journal Times that Copacetic, a hat store downtown with close connections to lying John, is going out of business.  Perhaps she has to help her husband hide his ties to and $ from lying John.  Monte Osterman has benefited from some real bid-rigging.  He has stolen thousands of our tax dollars for his personal use.  Pig.

The city continues on with its plans for Machinery Rowboat and the events center.  Also, the old theater in Uptown.  Ha-ha!  Our grandchildren and great-grandchildren will have to pay for all this stuff.  We don't care.  We're drunken sailors with a load of someone else's loot.  We also have some imported felons working for the city who know how to get things done.

Build a bridge from Hwy31 to I-94.  Call it the John Dickert lie way.  Only express traffic allowed.  Do it.  Foxconn will pay for it.

Don't forget: Foxconn will fix everything.  They are our saviors who only want a few billion dollars from us.

I love you all.  Slowly now the pressure will build as we head into the holidays.  Take some time for yourself.  Buy yourself something.  Try not to drink too much. Stop by for Christmas cookies anytime.
_______________________________
Please donate: paypal.me/jgmazelis
If you don't like PayPal, send me a note at madamezoltar@jtirregulars.com and I'll send you my street address so you can send a check or money order.  Thank you
Posted by Madame Zoltar at 6:32 AM

Madame Z you can thank Drew for you dropping in our fantasy football. I dropped to 5th place because of him.