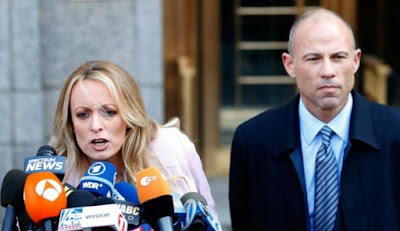 Stormy Daniels' legal team - led by lawyer Michael Avenatti - must be getting bored since a federal judge in Los Angeles ordered a 90-day delay of her lawsuit against President Trump and his former personal attorney Mike Cohen (who has promised to plead the fifth during the proceedings). Because Stormy has filed another defamation lawsuit, this time exclusively against President Trump, as Reuters reports.
The lawsuit, which was filed in federal court in New York on Monday, seeks damages from Trump for a tweet he sent earlier this month where he criticized a composite sketch that, Daniels said, depicted a man who had threatened her in 2011. He reportedly demanded that she stay quiet about her sexual encounter with Trump. That would've been around the time she gave an interview about her affair with Trump to In Touch magazine which wasn't published until recently.
Her previous lawsuit, filed in Los Angeles, sought to have her released from an NDA she signed shortly before the 2016 vote where she also accepted a $130,000 "hush money" payment from Cohen.
"A sketch years later about a nonexistent man. A total con job, playing the Fake News Media for Fools (but they know it)!," Trump said.
According to the filing, cited by the Associate Press and Reuters, the tweet was "false and defamatory" arguing that Trump knew what he was saying out Daniels' claim was false and also disparaging.
The lawsuit also claims Daniels has been exposed to death threats and other threats of "physical violence."
Daniels, whose given name is Stephanie Clifford, is seeking a jury trial and unspecified damages.
"We intend on teaching Mr. Trump that you cannot simply make things up about someone and disseminate them without serious consequences," Avenatti said.
As the Associated Press points out, Daniels, aided by Avenatti, has sought to keep her case in the public eye. She revealed the sketch that Trump mocked during an appearance on the View earlier this month. Trump is facing another defamation lawsuit in New York, this one filed by Summer Zervos, a former "The Apprentice" contestant who says Trump made unwanted sexual contact with her in 2007. She sued him after Trump dismissed her claims.
https://youtu.be/UJ6pLKlU-8Q
Posted by Clint Teeters at 4:19 PM

Email ThisBlogThis!Share to TwitterShare to FacebookShare to Pinterest
Labels: Trump