Taiwanese tech manufacturer Foxconn will siphon seven million gallons of water per day from Lake Michigan after their upcoming Mount Pleasant, Wisconsin plant was granted approval by the Wisconsin Department of Natural Resources.


Approximately 20% of the world’s fresh water can be found in the Great Lakes, which has historically been used for public purposes such as water utilities and drinking water – and protected by the 2008 Great Lakes Compact agreement intended to preserve the resource.
The agreement states “In general, there is a ban on new diversions of water from the Basin but limited exceptions could be allowed in communities near the Basin when rigorous standards are met.”
Exceptions to the compact can be granted if permission is received from all eight governors of states which surround the great lakes.
Foxconn, however, did not receive permission for the water draw – instead using a loophole which allowed the nearby town of Racine, which falls inside the Great Lakes Basin, to request the additional water and pipe it to the Foxconn factory in Mount Pleasant – a city served by the Racine water utility.


The request from Racine was allowed because water utility serves a small percentage of residents in Mount Pleasant. That allowed the DNR to say the diversion qualified as being used for “public water supply purposes” and would not require the type of stringent review applied to other cases. The DNR did acknowledge that the diversion would “partially” include the Foxconn facility. –Gizmodo

This loophole has angered environmentalists, which executive director of the Wisconsin League of Conservation Voters, Kerry Schulmann, says is “a thinly veiled attempt to degrade the Great Lakes Compact, one of the finest conservation achievements in a generation.”
Meanwhile, the Compact Implementation Coalition – organized to ensure that the Great Lakes Compact is adhered to, slammed the decision. “The CIC feels it is unfortunate that DNR is ignoring not only the spirit, intent and plain language of the Great Lakes Compact, but also the voiced concerns of thousands of Wisconsin citizens,” said the group in a statement. 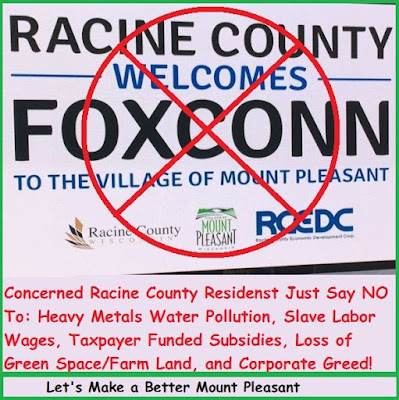