These are the clerks who carried Wisconsin through its April pandemic election. Here are their fears about November. 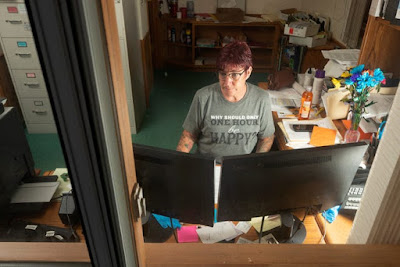 By day, Wendy Smith — a tattooed, magenta-haired, motorcycle-riding 49-year-old — is a data analyst for an insurance company.
By night, she is the part-time clerk for the Town of Nokomis, population 1,359.
And in November, Smith will be one of the most important people in Wisconsin.
That’s because she and her 1,900 fellow clerks — who worked overtime to rush a million absentee ballots to voters for Wisconsin’s chaotic spring election amid a pandemic — will be asked to do the same thing again in three months, with potentially double the number of ballots.
“I thought it would be better after April,” said Smith, sitting in her cramped office at the Town Hall, across from a salvage yard. “And all it’s gotten is worse.”
Over the past three months, the Milwaukee Journal Sentinel, Columbia Journalism Investigations and the PBS series FRONTLINE interviewed more than 50 clerks across Wisconsin, finding that many are concerned about a repeat of the state’s messy April primary when thousands of absentee ballots went missing or reached voters late.
From farming towns to major cities, clerks' worries ranged from the labor-intensive absentee ballot process to their distrust of the postal system to the ever-changing directives from judges and officials.
Clerks said that few people understand the behind-the-scenes work that goes into processing an absentee ballot: from verifying IDs to entering information into state databases to stuffing envelopes. That’s not to mention all the work clerks do tracking down voters who made mistakes on their forms, preparing for in-person voting or completing non-election related duties.
It’s particularly stressful in Wisconsin, which is one of 17 states where a voter can request an absentee ballot up to five days before Election Day, but must return their completed ballot to the election office by Election Day to be counted. It’s a turnaround time that clerks say is virtually impossible to meet.
The stakes are high.
The past two presidential elections saw more than 3 million ballots cast in Wisconsin. If the pattern from April holds, that means more than 1.8 million voters could cast absentee ballots by mail this November, a volume that election officials said would present “terrific challenges.”
“We don’t want Wisconsin to become a poster child of how not to do an election,” said David Canon, a professor of political science at the University of Wisconsin-Madison.
Canon said he’s reminded of the 2000 presidential election, when confusion over “hanging chads” and a margin of just 537 votes gave Florida — and the presidency — to George W. Bush.
As a key swing state, Wisconsin also has little room for error. Donald Trump won the Badger State by just 22,000 votes in 2016, securing the presidency. Yet in April’s primary, 150,000 absentee ballots — about 10% of all ballots sent — were either not returned or rejected due to errors.
“You can have the whole presidential election riding on the results of that one clerk up in northern Wisconsin,” Canon said. “It really could come down to that.”
Read more: https://www.jsonline.com/story/news/2020/07/24/clerks-brace-influx-ballots-presidential-election-trump-absentee-vote-by-mail-wisconsin-november/5484050002/
Posted by OrbsCorbs at 8:47 AM