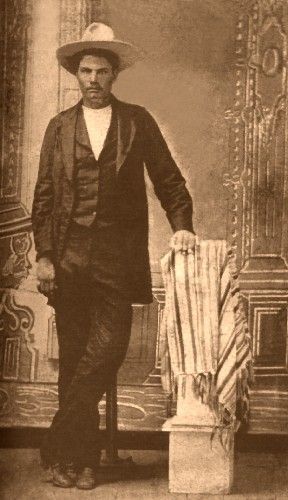 For all his many confrontations, practiced enemies and capable adversaries, John Wesley Hardin never faced a greater opponent or more serious threat than his own formidable self. While claiming his every violent act was out of the “first law of nature: self preservation,” again and again he made choices more likely to jeopardize than secure his fiery mortal spark. And contemporary historians have even implicated him in his own fall and destruction.

In a vintage 1924 article, John Hunter quotes John Wesley Hardin’s midwife as predicting he would either turn out to be a “great hero” or a “monumental villain.” In truth, he was wholly neither…. and a little of both.

Hardin was a prime example of that special breed of men known collectively as “gunfighters.” Given the proliferation of firearms in the Old West of the 1860s, 70’s and 80’s, just the fact of packing a Colt wasn’t near enough to qualify someone as a true gunslinger. Nor did a single occasion of firing a gun in defense or anger make one an accomplished gunfighter.

We all know that the Western gunfight seldom if ever occurred the ways it’s been commonly portrayed by historically illiterate Hollywood writers and directors: the mannerly encounter at high noon, revolvers holstered until the very last second. Giving one’s opponent the chance for a fair draw. Guns shot out of hands, without a bloody shattering of fingers and palms…. or apologizing to a downed hombre in the Virginian’s dusty drawl. It is nonetheless a fact that there once was, and probably still exists a certain special breed of men whose violent encounters involve face to face action– men who hold that they’re right, who insist on looking their antagonists in the eye, and being the last thing they see on the day of their death.

A “shootist” was neither a bushwhacker, robber nor assassin per se– but rather, a highly effective and often volatile individual whose violent deeds usually arose spontaneously and out of reaction to a perceived insult or slight. He was more likely to be a loner than either a gang or posse member…. and when reprising the roles of Sheriff or outlaw, white hat or black, he usually filled the part well. Silent, pleasant or petulant– he fairly exuded both character and style. He felt safer and perhaps saner outside the general fraternity and shallow associations of civilized men– and likely trusted his own intuition, discernment, skill, instincts and responses above anyone and everything else. Slow to enter into alliances of purpose or convenience, the shootist adhered to the classic martial dictum that “offense is the best defense.” He seldom backed down– not because he was inhumanly fearless, but rather, because he knew how to use his fear as fuel for assertive and sometimes explosive action. Whether objectively right or wrong, the shootist acted out of a moral certainty…. adhering to his own personal code of honor even when breaking existing laws and cultural taboos.

Read more: https://www.legendsofamerica.com/we-johnwesleyhardin/
Posted by Clint Teeters at 2:23 AM

Email ThisBlogThis!Share to TwitterShare to FacebookShare to Pinterest
Labels: Biography