"About botoxing camels, a tweeting Paul Ryan and offering a toilet to Trump"

WiGWag: News with a twist


The mayors of Philadelphia and Brockton, Massachusetts, made the Super Bowl matchup between the Eagles and the Patriots a battle of two Rockys — Rocky Balboa and Rocky Marciano. Philadelphia Mayor Jim Keeney bet on his city’s team and said if the Eagles lost, the Rocky statue near the steps to Philly’s art museum would wear a Patriot jersey. Brockton Mayor Jim Kenney bet on the Patriots, wagering a statue of Marciano would be clad in an Eagles jersey if New England lost. And you know what happened!

A dozen camels were disqualified from a beauty contest in Saudi Arabia for receiving Botox injections to enhance their appearance. “They use Botox for the lips, the nose, the upper lips, the lower lips and even the jaw,” Ali Al Mazrouei, the son of a prominent breeder, told UAE’s newspaper, The National. “It makes the head more inflated so when the camel comes it’s like, ‘Oh look at how big that head is. It has big lips, a big nose.’” Almost $32 million is awarded to pageant winners.


Yo, where’s my cheesesteak?

Jack Demsey’s Pub in New York City was flying with the Eagles and celebrated the Super Bowl with a Rocky Balboa look-a-like contest and a screening of Rocky films. Rocky fans know Sylvester Stallone was raised in New York City but is devoted to the Philadelphia Eagles. The Italian Stallion look-a-likes received free Philly cheesesteak sandwiches — in a contest sponsored by Donegal Irish Whiskey.

Paul Ryan faced a torrent of ridicule on social media after he sent out a tweet touting a woman whose paycheck rose $1.50 per week as evidence that the Republican tax reform package is working. Ryan, whose net worth is estimated at $7 million, didn’t reveal how much more he’s getting.

Charlie Berens, the creator of the comedy web series Manitowoc Minute, wants Wisconsin lawmakers to change the state’s motto from “Forward” to “Keep ’er Movin.’” He also proposes giving the state flag’s sailor and miner a couple of beers and adding some women to the state coat of arms. And he’d make “Big Jenga” the official state sport. Berens was recently at the Capitol to lobby for his changes.

Donald and Melania Trump asked the Guggenheim Museum to lend them a Van Gogh painting — “Landscape With Snow” — for their private residence in the White House. Museum curator Nancy Spector, who has been openly critical of the president and his policies, instead offered to loan the Trumps an 8-karat gold toilet, titled “America.” The toilet is Maurizio Cattelan’s jab at the nation’s greedier instincts. Spector wrote to the Trumps: “It is, of course, extremely valuable and somewhat fragile, but we would provide all the instructions for its installation and care.”

Here’s a warning for current and prospective users of marijuana: Smoking pot can make your sweat smell like skunk. That’s not an urban legend. Real, honest-to-gosh researchers have explained why some varietals of weed can produce skunky armpits, particularly when smokers are stressed out or working out. Google it or check out the Reddit thread. And chill.

David Joyner has had quite a career path since his first job as a software analyst for Texas Instruments. From 1991 to 2001, he played Barney, the popular purple dinosaur on the PBS children’s show Barney & Friends. Today he provides tantric massages for women that include “cosmic, mind-blowing orgasms” The sessions last three to four hours and cost $350.

Normally the previous year’s recipient of the Best Actor Oscar presents the award to this year’s best actress winner. But last year’s winner, Casey Affleck, bowed out due to allegations of sexual harassment. Affleck said he didn’t want to be “a distraction.”

Brenda Fitzgerald is out, having resigned her post as director of the U.S. Centers for Disease Control and Prevention. Less than a month after the Trump appointee stepped into the job of the nation’s top public health official, she purchased stock in a tobacco company. It takes a certain kind of cluelessness.


Leaving us in suspense

Former U.S. Rep. Michele Bachmann, the kooky evangelist from Minnesota who briefly ran for president, says she’s waiting for God to tell her whether to run for the U.S. Senate seat vacated by Al Franken. “The question is: Am I being called to do this now? I don’t know,” she told convicted fraudster and PTL TV host Jim Bakker.

Former Trump campaign surrogate Lynne Patton, who heads a regional office of the U.S. Department of Housing and Urban Development, apparently regrets attacking a reporter via Twitter. Patton referred to a reporter with the Urban Radio Networks as “Miss Piggy.” He then tweeted an apology to the reporter, HUD Secretary Ben Carson and the #Trump family. 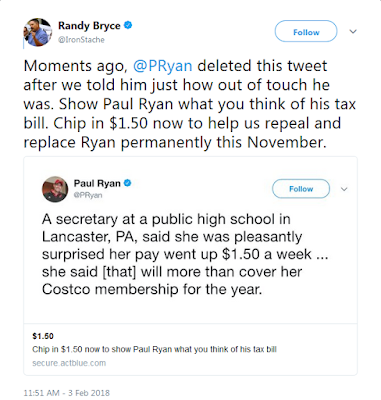