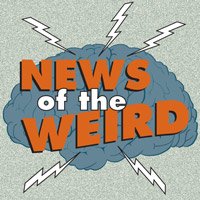 by Editors at Andrews McMeel Syndication
11:52 AM

Something to Sing About
The Lucerne University of Applied Sciences and Arts in Switzerland has a new course of study for scholars to pursue: a bachelor's or master's in yodeling. Beginning in the 2018-19 academic year, students will be able to major in the traditional form of singing, which was used by Swiss herdsmen to communicate with each other in the mountains. The BBC reported that prize-winning yodeler Nadja Räss will lead the courses, which will also include musical theory and history. “We have long dreamed of offering yodeling at the university,” gushed Michael Kaufmann, head of the school’s music department.
The Continuing Crisis
Birds nesting near natural gas compressors have been found to suffer symptoms similar to PTSD in humans, according to researchers at the Florida Museum of Natural History, and noise pollution has been named the culprit. The Washington Post reported the team studied birds in the Rattlesnake Canyon Habitat Management Area in New Mexico, which is uninhabited by humans but does contain natural gas wells and compression stations that constantly emit a low-frequency hum. The steady noise was linked to abnormal levels of stress hormones, and the usually hardy western bluebirds in the area were found to be smaller and displayed bedraggled feathers. “The body is just starting to break down,” explained stress physiologist Christopher Lowry.
Toilet Ghost
Homeowners in Noosa, Queensland, Australia, were perplexed about why their toilet kept randomly flushing, so on Jan. 28, they looked into the flush mechanism embedded in the wall behind the toilet. Then they summoned Luke Huntley, a local snake catcher. Huntley found a 13-foot brown tree snake in the niche, according to the Daily Mail, resting on the flush mechanism. “Hopefully, he’s going to be able to come straight out,” Huntley said on a video of the capture, “but he’s a little grumpy.”
Government in Action
Saugatuck, Mich., attorney Michael Haddock’s dog, Ryder, probably gave the mail carrier a day off after receiving an unexpected letter on Jan. 27 from the State of Michigan Unemployment Insurance Agency. According to WZZM TV, Haddock opened the envelope addressed to Ryder and found a letter saying that Ryder is eligible for $360 per week in unemployment benefits. “I knew he was clever,” Haddock said of Ryder, “but he surprised me this time.” The UIA admitted that its computer did send the notice to Ryder, but it was later flagged as suspicious, and the German shepherd won’t receive any benefits after all.
Smooth Reaction
A Missouri State University freshman identified only as Hayden may have set the perfect stage for a romantic story he’ll tell into old age. In January, as he trolled Tinder, he spotted Claudia, also a student at MSU in Springfield. But, as the Springfield News-Leader reported, Hayden accidentally swiped left, rejecting her, so he decided on a bold move to find her. On Jan. 20, he searched the MSU website for every person named Claudia and emailed them all, asking “the” Claudia to email him back. He offered a doughnut date for “the one that got away.” Claudia Alley, a freshman from Jefferson City, got Hayden’s email and knew she was his target because he referenced a joke she made in her Tinder bio. Alley emailed Hayden, and the two planned to get doughnuts—and perhaps make history—later that week.
Awesome!
Rookie metal detectors Andy Sampson and Paul Adams were out looking for treasure along the Suffolk/Essex border in England when they came across more than 50 gold coins and pottery. Sampson said Adams started “shouting and jumping around and dancing.” As for himself, Sampson immediately started figuring out how he would spend the money, which the pair thought might amount to 250,000 pounds or more. Alas, when Sampson showed the coins to his neighbor, he said, “They’re not real—there’s something wrong with them.” Sure enough, when the treasure hunters made inquiries, they found that the coins and pottery were props for a BBC TV show, “Detectorists.” Sampson and Adams told the BBC on Jan. 31 that they have “got over” their huge disappointment and will continue to metal detect.
COPYRIGHT 2018 ANDREWS MCMEEL SYNDICATION