Researchers working in Burma have uncovered the fossilized remains of a 99-million-year old male daddy longlegs with its penis fully extended and erect. It’s possibly the oldest—and longest held—erection in the history of science.
What a way to go. This daddy longlegs, also known as a harvestman, died with its proverbial pants down. Its penis was still extended to half its body length. Unlike their spider and scorpion cousins who use modified legs to transfer sperm, daddy longlegs sport penises. Apparently very long penises.
When it died, this ancient creature was clearly in a state of arousal, and possibly in the vicinity of a female. How it went from a potential union to paleontological posterity is anyone’s guess. Perhaps it fell into oozing resin amid all the sexual excitment. Alternately, the male daddy longlegs may have accidentally fallen into some tree resin as it was going about its daily business, and as it was struggling, its blood pressure rose, forcing its penis to squeeze out accidentally. 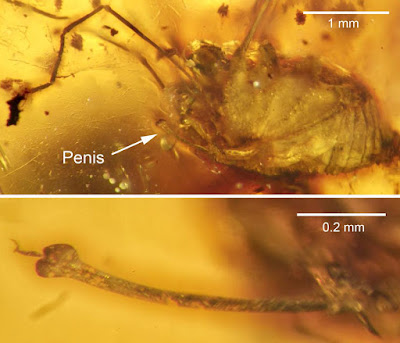 Regardless, the beautifully preserved specimen is providing paleontologists with a remarkable opportunity to study this poorly understood animal—and its penis.
“This is the first record of a male copulatory organ of this nature preserved in amber and is of special importance due to the age of the deposit,” write the researchers in their study, which now appears in the Science of Nature. “The penis has a slender, distally flattened truncus, a spatulate heart-shaped glans and a short distal stylus, twisted at the tip.”
In fact, the penis is so unique that the specimen has been slotted into its own family of arachnids and now bears the name Halitherses grimaldii. These animals have been around for more than 400 million years, and they’re notoriously difficult to differentiate. But this particular animal’s penis—its characteristic heart-shaped head and twirled tip—shows it’s different than any other species.
Embarassing for the harvestman, cool for science.
[National Geographic]
From: https://gizmodo.com/behold-the-first-erect-penis-ever-found-preserved-in-am-1756584206
Posted by OrbsCorbs at 8:52 AM