Predators With Badges: The Sex Traffickers On America's Police Forces

“Sexual predation by police officers happens far more often than people in the business are willing to admit.”

We are a nation on the brink of a nervous breakdown.

Undeniably, the blowback from COVID-19 lockdowns and mandates continues to reverberate around the country, impacting the nation’s struggling workplaces, choking the economy and justifying all manner of authoritarian tyrannies being inflicted on the populace by state and federal governments.

Yet while it is easy to be distracted by political theater, distressed by the COVID-19 pandemic, and divided over authoritarian lockdowns and mandates, there are still darker forces afoot that cannot—should not—must not be ignored.

Here’s a news flash for you: there are sexual predators on America’s police forces.

Indeed, when it comes to sex trafficking—the buying and selling of young girls, boys and women for sex—police have become both predators and pimps. As the Philadelphia Inquirer reports, “Hundreds of police officers across the country have turned from protectors to predators, using the power of their badge to extort sex.”

Victims of sex trafficking report that police are among those “buying” young girls and women for sex. Incredibly, this COVID-19 pandemic has resulted in even greater numbers of children being preyed upon by sex traffickers.

Unfortunately, rather than being part of the solution, America’s police forces—riddled with corruption, brutality, sexual misconduct and drug abuse—have largely become part of the problem.

In New York, for instance, seven NYPD cops—three sergeants, two detectives and two officers—were accused of running brothels that sold 15-minute sexual encounters, raking in more than $2 million over the course of 13 months.

In California, a police sergeant—a 16-year veteran of the police force—was arrested for raping a 16-year-old girl who was being held captive and sold for sex in a home in an upscale neighborhood.

A week-long sting in Florida ended with 277 arrests of individuals accused of sex trafficking, including doctors, pharmacists and police officers.

Sex trafficking victims in Hawaii described “cops asking for sexual favors to more coercive situations like I'll let you go if you do X, Y, or Z for me.”

The conservative meme, "Let's Go Brandon!" is a euphemism for "f--- Joe Biden" that has gone viral across America since an early October NASCAR race. The phrase has even made it on the lower of an AR-15, a lightweight semi-automatic rifle, sold by one gun armory in South Carolina, triggering an NBC reporter to call the Secret Service.

NBC News' Ken Dilanian was so distraught about Palmetto State Armory's new "LETSGO-15 Stripped Lower Receiver" that he "called the Secret Service about this" but failed to mention what he actually discussed. He said, "they [Secret Service] had no comment."

Details about the lower include "LETSGO-15" is made "from the most advanced aerospace manufacturing technology." The lower includes a fire selector with three modes: "'F@CK!'" (Safe), "'JOE!'" (Fire), "'BIDEN!'" (Full-Auto)." 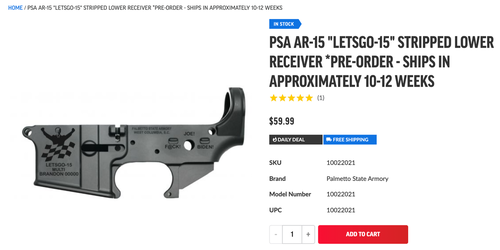 "Let's go Brandon" refers to a slogan that has gone viral across America since early October at Talladega Superspeedway in Alabama in which a journalist misreported the chant "f--- Joe Biden" as praise toward winning driver Brandon Brown.

More on this is a Maryland-based gun advocacy group, The Machine Gun Nest, which writes:

Considering that the rallying call in 2016 was "F Donald Trump" the idea that a "let's go Brandon" lower receiver would warrant a call to the secret service is another reason why the left has lost Virginia, and will continue to lose states where they are out of touch with the general population. If this lower receiver read "F*** Donald Trump" not sure if this person would have even batted an eye. The fact that the caller in question is a NBC News reporter is Unsurprising, because we know where the corporate media's loyalties lie.

Whatever the crooked and kiked court decides he is, he will always only be one thing to me: an American hero.

Posted by Clint Teeters at 2:02 AM