At a news conference Friday morning, authorities said that 1,000 homes have been burned and noted no fatalities reported so far. They said 200 people are in emergency shelters. 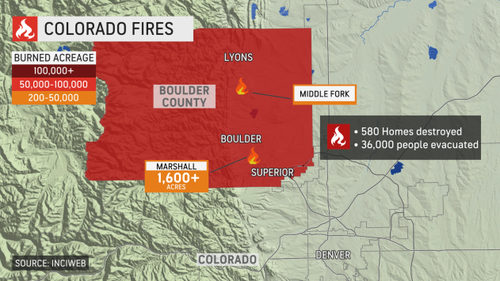 Authorities believe the wildfires were sparked by down power lines and spread rapidly due to severe drought and high winds.

Ruthie Werner, a resident of Boulder County, told NYTimes the inferno "felt like the apocalypse."

Here is some shocking footage of the wildfire and its devastation.

Entire neighbors burned to the ground. 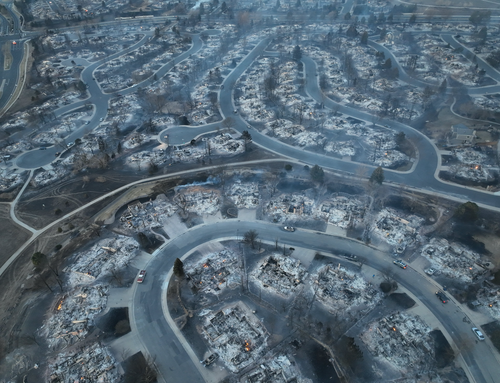 More video from the ground.

A passenger on a commercial flight caught unbelievable footage from the sky earlier this morning.

On Thursday, a wind-driven wildfire forced tens of thousands of residents to evacuate near Denver as hurricane-force winds devoured homes and businesses. 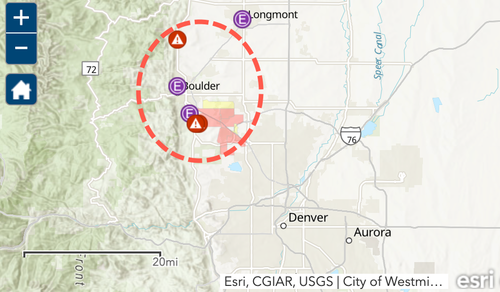 The wildfire began at 1030 local time Thursday and swept through suburban areas in Boulder County. At least 30,000 people were evacuated as fast-moving wildfires burned nearly 600 homes, a shopping mall, and a hotel. By night, the fire had burned 1,600 acres.

This wildfire was the most destructive in state history in terms of destruction. The last fire to burn 500 homes was in 2013 and called the "Black Forest Fire."

The good news overnight is that the National Weather Service Boulder Office said winds calmed, and the fire is expected to simmer down.

Both wildfires occurred late into the winter season and were fueled by hurricane-force winds, upwards of 110 mph in some recordings.

"This is the kind of fire we can't fight head-on," Pelle said. "We actually had deputy sheriffs and firefighters in areas that had to pull out because they just got overrun."

The fires prompted Gov. Jared Polis to declare a state of emergency, allowing the state to tap into disaster funds. Much of the evacuations were across Superior and Louisville and for some residents of Broomfield and Westminster. All the areas are near Denver.

More videos of the fire have surfaced on social media.

The historic drought has made wildfires harder for firefighters to combat. Much of Boulder County hasn't seen rain since mid-summer.

Posted by Clint Teeters at 1:58 AM